To expand presence in the domestic market, The Cheesecake Factory Incorporated (CAKE - Free Report) announced the opening of its new restaurant in Orlando, FL. The restaurant, located in Vineland Pointe, will offer more than 250 menu items along with over 50 signature cheesecakes and desserts. 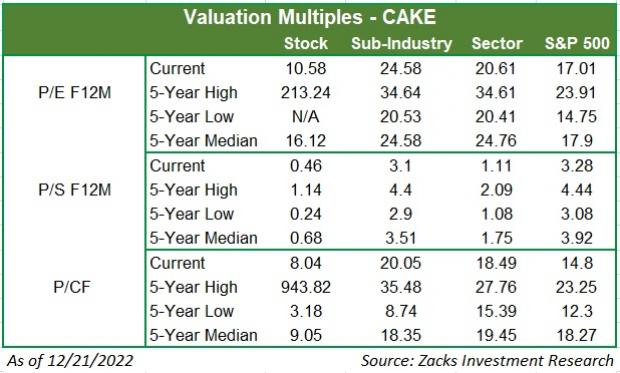 Notably, shares of the company have outperformed the Zacks Retail - Restaurants industry in the past three months. Cheesecake Factory has been benefiting from its diverse menu, operational distinction and unique ambiance appeal to customers along with expansion initiatives. Various initiatives to boost sales like menu innovation, roll out of an improved server training program, launch of mobile payment app and focus on delivery have been driving growth. Notably, menu-innovation and advanced digital capabilities are primary forte of the company.

In order to stay afloat in the competitive environment, this Zacks Rank #3 (Hold) company is committed to bolster its sales. In fact, Cheesecake Factory’s efforts to improve guest experience have been stabilizing sales since the fourth quarter of fiscal 2017.

However, rising costs stemming from increase in wage rate scenario is a concern. Pre-opening costs of outlets, given the company’s unit expansion plans and expenses related to sales initiatives, are adding to its woes.