Walgreens is the Worst Dow Stock Now, Will 2020 Be Different?

The healthcare space has not been among the best Dow Jones performers this year, thanks to the lingering U.S.-China trade dispute and fears of regulatory hindrances, among other factors. Among Dow stocks, drug retailor Walgreens Boots Alliance (WBA - Free Report) has been the worst performer.

Walgreens has had a dismal stretch this year owing to a number of factors including rising drug costs and the threat of the entry of non-MedTech stalwarts like Amazon (AMZN - Free Report) , JP Morgan (JPM - Free Report) and Berkshire Hathaway into the healthcare space.

Drug Cost Inflation:Going by an article in CBS News, more than 3,400 prescription drugs’ prices have been hiked in the first six months of 2019, showing an increase of 17% from a year earlier. This is inducing patients to replace prescription medicines with low-cost generic drugs. This has largely affected the business of the likes of Walgreens.

Healthcare Foray of Market Stalwarts: Shares of Walgreens have also been declining since non-healthcare leaders started floating major healthcare ventures. The price competition for Walgreens Boots has escalated with the emerging online peers eating into its pharmacy customers. Apart from Amazon, Walgreens has been facing immense competitive pressure from the likes of Walmart (WMT - Free Report) , which has been capturing market share in the profitable household and beauty categories. The presence of companies like Costco (COST - Free Report)  and dollar store chains like Dollar General (DG - Free Report) , which are currently offering the same products as Walgreens across both online and physical stores at much cheaper rates, is also a bother. 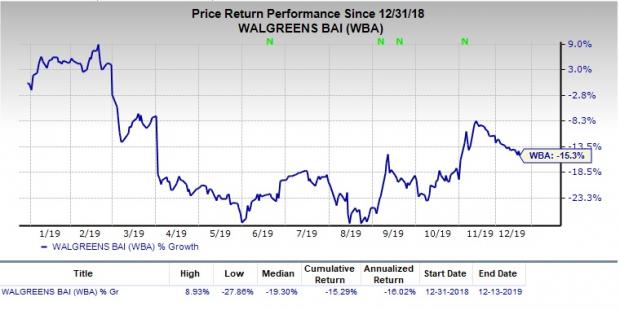 Other Adverse Factors: Walgreens has also been hit by a FDA crackdown with regard to its sale of tobacco and e-cigarettes, especially to teenagers, this year. Brexit has been posing tough challenge to Walgreens as sales at its Boots UK stores declined due to the worsening of the consumer scenario in the U.K.

Walgreens’ dismal performance has probably compelled it to consider a sell-off. A Nov 11 Bloomberg news stated about a potential deal citing some undisclosed source, which claimed that private equity firm KKR & Co. has formally forwarded a takeover offer to Walgreens Boots for $70 billion.

Investors had taken this news positively, as was evident from the 6% share price hike over the next two days. However, after the initial surge, the stock retraced after analysts raised doubt over the feasibility of such a massive deal.

Is There a Rebound in the Cards?

Walgreens, with a massive market cap of $51.51 billion, has been leaving no stones unturned. The company recently inked a number of agreements to diversify its product offerings and strengthen its retail pharmacy business.

While the company’s major peer CVS Health (CVS - Free Report) has adopted the growth-by-acquisition policy to defy all odds (through vertical integration by acquiring health insurance giant Aetna), Walgreens is currently focusing on its front-end stores expansion and has announced partnerships with the likes of Kroger  and FedEx. The FedEx alliance is aimed at offering convenient access to FedEx drop-off and pickup services at several of Walgreens locations across the nation. The Kroger alliance, in the meanwhile, is expected to boost the company’s supply-chain efficiency.

Further, the intensifying competition in the U.S. retail drugstore market has compelled Walgreens to diversify its product offerings. In line with this, investors are currently looking forward to its tie up with Alphabet’s life sciences and healthcare segment Verily on multiple projects pertaining to chronic ailment.

Walgreens is also progressing well with its collaboration with LabCorp. The company is planning to open at least 600 LabCorp patient centers across the United States, thereby offering diagnostic lab testing services in the community. During the fourth quarter, the company had opened 21 centers, taking the total to 58.

In a bid to ensure availability of specialty brand drugs, Walgreens tied up with Express Scripts and plans to expand their existing group purchasing efforts. Since biosimilars have the potential to lower production costs, the move is considered a prudent and timely one.

We believe such measures will help straighten things out for the company in 2020, to a certain extent.

Further, according to a Dec 12 CNN.com news, the House Democrats passed a crucial bill to cut down prescription drug price in the United States. The bill, titled the Elijah E. Cummings Lower Drug Costs Now Act, would allow the Health & Human Services secretary to set, through an annual negotiation, the best prices for at least 50 costly branded prescription drugs and up to 250 medications, including insulin. Prices would be limited at 1.2 times their cost in certain other first world nations. If this drug-price cap bill finally gets implemented, Walgreens is sure to gain.

In a market, where legal regulatory challenges and reimbursement pressure are historically altering the trend, it will be interesting to see how Walgreens deals with the odds and delivers the promised long-term earnings growth of 6.8%.