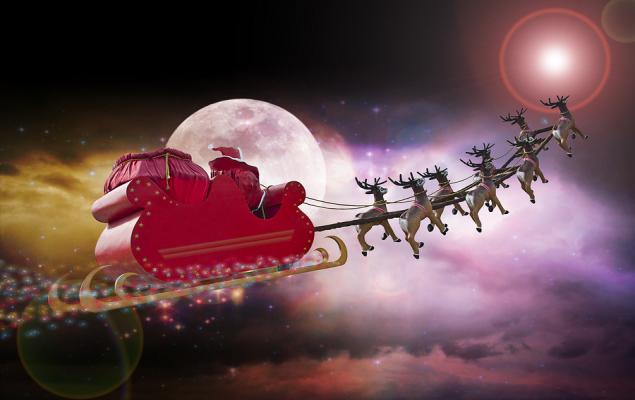 The U.S. market is in great shape as 2019 nears end, thanks mainly to U.S.-China trade optimism, a dovish Fed, easing of Brexit uncertainty and dissipating global growth worries. The S&P 500, the Nasdaq and the Dow Jones hit all-time highs on Dec 23 as the Santa rally took Wall Street in its grip (read: Bull Market Rages On: Bet Big for 2020 With These ETFs).

So far this year, the Dow Jones has been the laggard among the trio but the resignation of Boeing’s (BA - Free Report) CEO over 737 Max crisis bodes well for the blue-chip index. Boeing shares gained 2.9% on Dec 23 and boosted the Boeing-heavy Dow Index.

Perfect Setting for a Santa Rally

Santa Claus rally refers to the jump in stock prices in the week between Christmas and New Year's Day. There are several factors behind this surge including "tax considerations, happiness around Wall Street, people investing their Christmas bonuses and the fact that the pessimists are usually on vacation this week" per Investopedia.

In fact, some even believe that investors buy stocks during this period to cash in on another strong equity event, known as the January Effect, which takes place soon after. According to Stock Trader’s Almanac, there has normally been “a short, sweet, respectable rally within the last five days of the year and the first two in January.”

There has been average 1.3% gain since 1950 and it has offered positive returns about 75% of the times since 1969, per a source. The current market movers indicate a perfect Santa Clause rally.

The S&P 500 recorded its fourth successive weekly gain. The benchmark has gained for the eighth time in the past nine sessions. After the astounding gains, thoughts of a correction in the market or overvaluation concerns are justified.

Wall Street bears signaled earnings weakness as the main concern for 2020. “The percentage of S&P 1500 (large-, mid- and small-cap) companies with positive forward EPS growth has deteriorated meaningfully since 2018,” per Morgan Stanley analysts quoted on MarketWatch.

The latest stock market rally can largely be attributed to global policy easing. It is important to note that the combined size of the balance sheet of the Fed, BoJ and the ECB is stretched to the level of $14.5 trillion in November 2019, up from the pre-crisis level of $4 trillion, per an article published on MarketWatch. This indicates the central banks’ limited power of further balance sheet expansion from here. Without the central banks’ support, upbeat economic and corporate earnings growth are necessary to prolong the rally.

Nobel-prize winning economist Robert Shiller is hopeful of an equity market rally in 2020 despite rising equity valuation. Shiller PE Ratio, known as CAPE is around 30 now, which is moderately high compared to historical standards.

Chances of President Trump getting re-elected (according to Shiller) and extremely upbeat investors sentiments, thanks to a series of good news coming in on the trade front will keep powering markets higher in the coming days.

How About High-beta ETFs?

Since we are poised to see a 2020 market rally, high-beta ETFs are expected to gain handsomely. Beta is directly related to market movement. Notably, high-beta funds tend to rise or fall more than the stock market and are thus more volatile. A beta that is greater than 1.0 is prone to be more volatile and more gainful. When markets soar, high-beta funds experience larger gains than the broader market counterparts and thus outpace their rivals (read: 5 High-Beta ETFs to Buy on Trade Talk Hopes).

But investors who are worried about overvaluation might want to look for some value quotient in their investments. We highlight below a few ETFs that have a beta greater than 1.0, P/E (36 months) below 19.67 times of SPDR S&P 500 ETF Trust (SPY - Free Report) and one-month price gains of at least more than the S&P 500 (up 3.3%).