Here is Why Airline Stocks Underperformed the Market in 2019

It is a well-documented fact that stocks in the airline space have not had a great time in 2019, to which we will soon bid adieu. Headwinds like lackluster cargo business due to reduced freight demand and trade tensions between the United States and China, and loss of revenues following flight cancellations arising out of the grounding of Boeing 737 MAX jets, have prevented the stocks from flying high this year.

The Zacks Airline industry has significantly underperformed the S&P 500 Index so far this year. The industry has gained 14.5% on a year-to-date basis compared with the S&P 500’s appreciation of 27.2%. 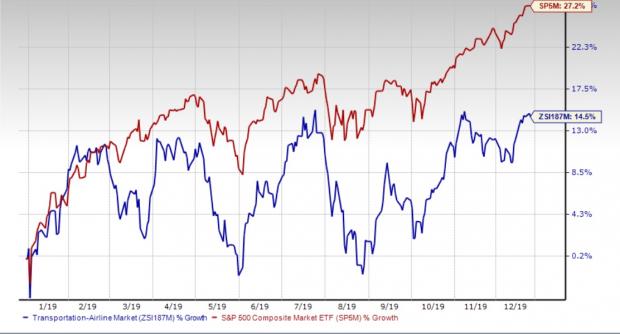 Let’s delve deep to unearth the reasons behind the unimpressive performance of airline stocks in 2019.

As a reminder, all U.S.-registered Boeing 737 MAX jets have been grounded since March this year after they were involved in two fatal air crashes in different parts of the world over a span of five months apparently due to software malfunctioning. The grounding of the above-mentioned jets has resulted in reduced capacity and escalation of non-fuel unit costs, thereby limiting bottom-line growth. For example, American Airlines now expects its 2019 capacity to increase only about 1% over 2018 levels (earlier guidance had predicted an increase in the e in the 2-3% range). This reduction from the previous guidance is primarily due to the grounding of the company’s 737 MAX aircraft. Moreover, the carrier anticipates its full-year pre-tax income to be hurt by roughly $540 million due to the grounding.

Moreover, decline in cargo revenues, the second-largest contributor to the top line of most carriers after passenger revenues, was another undesirable development in 2019. The decline was mostly due to lower volumes and yield. For example, at Delta Air Lines (DAL - Free Report) , cargo revenues declined 13% year over year to $567 million in the first nine months of 2019.

According to the International Air Transport Association (“IATA”) cargo demand declined 3.3% in 2019 — the sharpest drop since 2009. Moreover, freight carriage declined from 63.3 million tons in 2018 to 61.2 million tons in 2019. Trade dispute between the United States and China took a heavy toll on air freight volumes in 2019. Trade tensions apart, escalated levels of political uncertainties across the globe hurt the air cargo business in 2019.

In fact, trade in emerging countries have underperformed that of advanced nations this year primarily due to higher sensitivity of the emerging economies to trade tensions, rising political instability and sharp currency depreciation in some of the key emerging markets. This development has spelt doom for air freight demand.

Weather-related disturbances have also disrupted airline operations this year, resulting in loss of revenues and increased non-fuel costs due to the resultant flight cancelations. For example, the Miramar-based discount airline Spirit Airlines’ September quarter revenues were hurt to the tune of roughly $25 million due to Hurricane Dorian-induced flight cancellations.

Reflecting these headwinds, in December, IATA revised its 2019 profit forecast for the industry to $25.9 billion from the $28 billion forecast provided in June.

Recent positive developments on the trade war front, including agreement on the terms of a phase-one trade deal, indicate that tensions between Washington and Beijing might ease in 2020. This bodes well for airlines. In fact, IATA predicts 2% growth with respect to cargo traffic in 2020.

Also, demand for air travel is expected to be stronger in 2019 with IATA forecasting a 4% improvement in passenger numbers to $4.72 billion in 2020. Moreover, Boeing 737 Max jets might resume operations next year.

Want to Own Airline Stocks Now?

With IATA suggesting good things for airlines in in 2020, investors might want to add stocks from the space to their portfolio. We have shortlisted three — Hawaiian Holdings (HA - Free Report) , Ryanair Holdings (RYAAY - Free Report) and Allegiant Travel Company (ALGT - Free Report) — that might be solid bets. You can see the complete list of today’s Zacks #1 Rank stocks here.