Veeva Systems Inc. VEEV is likely to gain from a slew of positive developments in recent times and a raised view for fiscal 2020.

Shares of this company have rallied 39.6% compared with the industry’s 16.6% rise in a year’s time. The current level also compares favorably with the S&P 500 index’s 23.8% rise over the same time frame.

This $22-billion pharmacy innovation company currently has a Zacks Rank #2 (Buy). Veeva’s earnings are expected to grow 21.9% in the next five years. Also, the company has a trailing four-quarter positive earnings surprise of 11.7%, on average.

The stock also has a Growth Score of B. Our research shows that stocks with a Momentum Score of A or B, when combined with a Zacks Rank #1 (Strong Buy) or 2, are better picks than most. 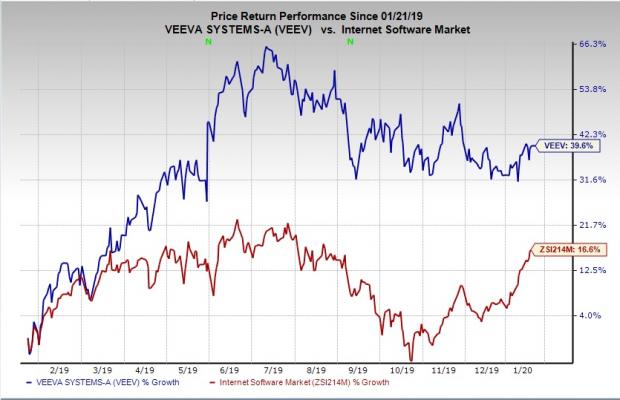 Let’s take a closer look at the factors that are working in favor of the company right now.

A series of recent developments are expected to aid the stock.

This month, seven of the top 20 largest global pharmaceutical companies have picked the Veeva Vault Study Startup. It is an advanced application that eliminates manual processes to speed cycle times and trial execution.

Reflective of these, the company raised its revenue guidance for fiscal 2020.

However, high expenses on the operational side and significant competition from the likes of Oracle and Microsoft (MSFT - Free Report) might impact the company.

Other top-ranked stocks in the broader medical space are Cerner Corporation CERN and DexCom DXCM, each carrying a Zacks Rank #2. You can see the complete list of today’s Zacks #1 Rank stocks here.