Wall Street resumed its rally with the commencement of February following a minor setback in January. U.S. stock markets record-breaking bull-run of 2019 came to a halt last month thanks to the outbreak of deadly coronavirus in China.

Several economists are of the opinion that it may delay global economic recovery. Consequently, the Dow 30 Index — popularly known as the blue-chip index — dropped 1% in January.

Despite market fluctuations, especially in the second half of the last month, several blue-chip stocks have popped primarily owing to their fundamental strengths. The share prices surged further following the resumption of Wall Street rally from the beginning of this month.

Dow Firmly in the Green Despite Volatility

The Dow declined 1% in January after completing an impressive rally of 22.3% in 2019, its best yearly performance in six years. On Jan 31, the index plunged 2.1% or 603 points on coronavirus concerns — marking its worst daily performance since August 2019. However, the blue-chip index gained 3.63% or 1,035 points in the first three trading days of February.

Notably, on Jan 15, the Dow set a milestone by closing above the key technical barrier of 29,000 for the first time. On Jan 17, the index recorded its all-time closing high of 29,348.10. In fact, the blue-chip index is just 0.2% shy of its previous record high level.

The Dow has rallied 2.6% year to date. Notably, 16 stocks out of total 30, has so far provided positive returns while three have provided double-digit returns.

A series of impressive economic data in January clearly indicates that the expansionary phase is here to stay albeit at a slow pace. Notably, the U.S. economy is expanding for the last 11.5 years — the longest expansion historically.

The ISM manufacturing index in January reported expansion of activities for the first time since July 2019. ISM services index revealed exceptional performance recording highest level in six months. The conference board reported that consumer confidence index for the month of January came in at 131.6 — the highest since August 2019. Moreover, the ADP reported that U.S. private-sector payrolls of January witnessed its biggest gain in four years.

Furthermore, on Jan 15, the United States and China signed a temporary trade deal popularly known as the phase-one trade deal. Although a complete deal is not likely to be signed before the U.S. presidential election this November, the interim deal will at least help in restoring U.S. business confidence and global economic growth.

Finally, Fed chair Jerome Powell has reiterated his commitment to do whatever needed to support economic expansion and not raise interest rate until the inflation crosses the central bank’s target level of 2%. Notably, it is currently at 1.6%.

At this stage, it will be prudent to invest in blue-chip stocks with a favorable Zacks Rank and strong EPS estimate revisions, which have surged year to date. We have narrowed down our search to five such stocks, each carrying either a Zacks Rank #1 (Strong Buy) or 2 (Buy). You can see the complete list of today’s Zacks #1 Rank stocks here. 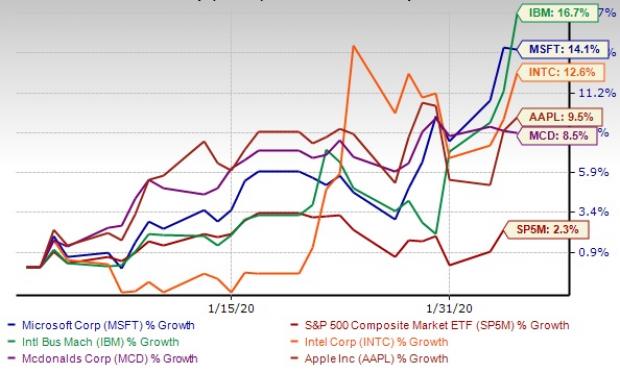 Microsoft Corp. (MSFT - Free Report) is one of the largest broad-based technology providers globally. Its offerings also include hardware and online services. Additionally, Microsoft offers support services in the form of consultation, training and certification of system integrators and developers. The company has an expected earnings growth rate of 18.7% for the current year (ending June 2020). The Zacks Consensus Estimate for the current year has improved 5.8% over the past 30 days. The Zacks #1 Rank stock has jumped 14.1% year to date.

International Business Machines Corp. (IBM - Free Report) provides advanced information technology solutions, including computer systems, software, storage systems and microelectronics. It operates in more than 175 countries. The company has an expected earnings growth rate of 4.1% for the current year. The Zacks Consensus Estimate for the current year has improved 1% over the last 30 days. The Zacks #2 Rank stock has rallied 16.7% year to date.

McDonald's Corp. (MCD - Free Report) operates and franchises McDonald's restaurants in the United States and internationally. It offers various food products, soft drinks, coffee, and other beverages and breakfast menu. The company has an expected earnings growth rate of 8.9% for the current year. The Zacks Consensus Estimate for the current year has improved 0.7% over the last 30 days. The Zacks #2 Rank stock has gained 8.5% year to date.