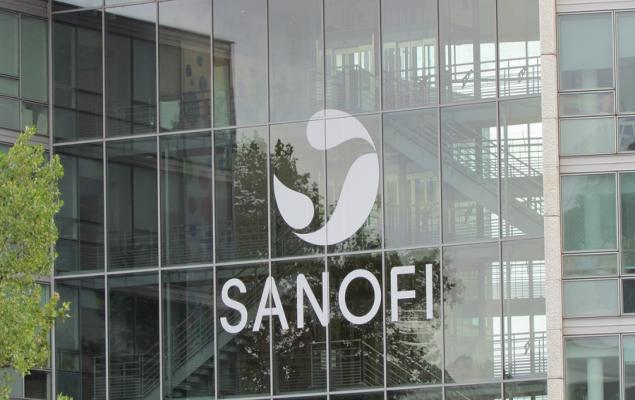 Fourth-quarter net sales of the French pharma giant rose 6.8% on a reported basis to $10.66 billion (€9.6 billion). Exchange rate movements benefited sales by 2.1% driven by a strong dollar and Japanese yen. At CER, sales increased 4.7% year over year. Sales however missed the Zacks Consensus Estimate of $11.12 billion.

Sales rose 11.8% at CER in the United States and 1.8% in the Emerging Markets. Sales were flat in Europe at CER but rose 0.6% in the Rest of the World (Japan, South Korea, Canada, Australia, New Zealand and Puerto Rico).

Pharmaceuticals sales (including the emerging markets) rose 2.4% in the fourth quarter to €6.55 billion driven by key eczema drug, Dupixent, which was partially offset by lower Diabetes and Established Rx products sales.

In the immunology franchise, Dupixent generated sales of €668 million in the quarter, up 133.1%. Sales of the drug in the United States were €545 million, up 134.7% driven by continued growth in atopic dermatitis and rapid uptake in new asthma indication and launch in chronic rhinosinusitis with nasal polyposis in June 2019. Sales in Europe were €64 million, up 117.2%.

Kevzara recorded sales of €53 million in the quarter, up 64.5%. Sanofi markets Dupixent and Kevzara in partnership with Regeneron Pharmaceuticals (REGN - Free Report) .

Oncology sales increased 12.6% to €333 million. Key cancer drug Jevtana’s sales were up 10.1% to €123 million supported by higher sales in the United States.

Rare blood disorders franchise, added to Sanofi’s portfolio with the acquisition of Bioverativ in 2018, fetched sales of €293 million, down 2.4% year over year. New drug Cablivi (caplacizumab) generated sales of €16 million in the quarter, lower than €20 million in the previous quarter, primarily due to price adjustments in Europe and increased assistance program participation in the United States. Sales of another drug in the franchise, Eloctate declined 14.9% in the quarter due to the ongoing competitive pressure in the United States.

The Diabetes franchise (excluding the emerging markets) declined 15.5% to €861 million due to lower sales of key drugs — Lantus and Toujeo.

Sales of diabetes drugs in the United States declined 20.5% to €454 million due to pricing pressure and loss of Part D business. In Europe, it dropped 4.4% and in rest of the world, it declined 21.8%.

Lantus sales decreased 23.9% to €485 million in the quarter. Lantus sales plunged 26.9% in the United States due to lower average net price and change in coverage with respect to Sanofi’s Part D business. In Europe, sales decreased 13.1% due to biosimilar competition and patient switching to Toujeo.

In the cardiovascular franchise, Sanofi’s anti PCSK9 therapy, Praluent, garnered worldwide sales of €68 million in the reported quarter, down 14.1%. Sales in the United States declined due to significantly higher rebates offered by Sanofi and partner Regeneron to payers to improve access to the drug. Amgen (AMGN - Free Report) is also facing similar issues with its PCSK9 inhibitor, Repatha. Sales of the other drug, Multaq, in this franchise rose 1.1% to €97 million.

Sales of Established Rx Products came in at €1.3 billion, down 4% mainly due to lower sales of Plavix and Aprovel in China due to anticipated price and inventory adjustments in the channel. Meanwhile, lower sales of Lovenox in Europe and generic competition for Renvela/Renagel in the United Sales also hurt segment sales.

Consumer Healthcare (CHC) GBU (including the emerging markets) sales were €1.15 billion, down 5.2% as higher sales in Emerging Markets were offset by lower sales in the United States and Europe. Sales declined 12.8% in the United States due to Sanofi’s voluntary recall of its over-the-counter acid reflux medicine Zantac, which is sold by the generic name of ranitidine by many other companies.

Meanwhile, non-core divestments and increased regulatory requirements, which resulted in product suspensions, also hurt the performance of the CHC segment.

Sanofi Pasteur (Vaccines) sales (including the emerging markets) rose 22% to €1.91 billion. U.S. sales of vaccines rose 33.1% in the quarter, reflecting the majority of U.S. influenza vaccine shipments in the fourth quarter. Sales also rose in Emerging Markets and Europe.

Selling, general and administrative expenses declined 1.4% at CER in the quarter, reflecting cost-control measures. Research and development expenses declined 0.7% at CER due to smart spending initiatives as well as portfolio prioritization.

Sanofi expects earnings to grow approximately 5% at CER in 2020. It now anticipates a positive currency impact of around 1% on earnings.

For the second quarter in a row, Sanofi’s results were mixed as it beat estimates for earnings but missed the same for sales. Double-digit growth in Specialty Care and Vaccines was offset by persistent sluggishness in Diabetes and Cardiovascular franchises and a weak performance in the CHC unit in the quarter. Its 2020 earnings outlook looked encouraging. Shares were up 3.4% in pre-market trading on Thursday. Sanofi’s shares have outperformed the industry in the past year. It has risen 13.1% in the said time frame compared with the industry’s increase of 11.9%.

Sanofi’s Specialty Care segment is on a strong footing particularly with regular label expansion of Dupixent. The drug has, in a very short time, become the key top-line driver for Sanofi. Importantly, Sanofi is discontinuing all its research activities in diabetes and cardiovascular area and will prioritize key growth drivers – Dupixent and vaccines. However, weak performance of the Diabetes unit, generic competition for many drugs and slower-than-expected uptake of core products like Praluent are headwinds.