DXP Enterprises, Inc. (DXPE - Free Report) recently announced that it has completed the buyout of Turbo Machinery Repair, Inc. As noted, the company used its cash balance to fund the transaction. However, terms of the deal have been kept under wraps.

The move complements DXP Enterprises’ buyout of Cortech Engineering, LLC — a major distributor of pumps and related process equipment — in September 2015. The deal allowed the company to expand its market share in municipal waste-water treatment, water treatment and desalination.

As noted by DXP Enterprises, the Turbo Machinery Repair buyout will enable it to strengthen its portfolio of rotating equipment solutions for oil and gas and manufacturing equipment markets. The addition of a strong pump repair facility in Northern California will facilitate the company in serving a stronger customer base.

Another notable inorganic move made by the company was the buyout of Application Specialties, Inc. (January 2018), a major distributor of abrasives, cutting tools, coolants and machine shop supplies. Notably, this buyout has helped DXP Enterprises to strengthen its offerings within the metal working product portfolio.

DXP Enterprises, which has a market cap of roughly $620.9 million, currently carries a Zacks Rank #3 (Hold).  In the past six months, the company’s shares have returned 4.4% compared with the industry’s growth of 17.1%. 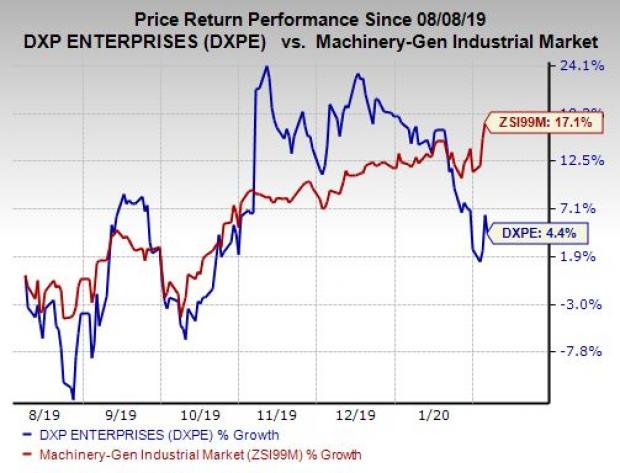 Barnes Group pulled off positive earnings surprise of 4.21%, on average, in the trailing four quarters.

Tennant delivered positive earnings surprise of 28.65%, on average, in the trailing four quarters.

What's in the Cards for Loews (L) This Earnings Season?