Applied Materials AMAT has topped quarterly earnings estimates in the trailing four periods to help the stock jump 55% in the last 12 months. Now, let’s dive into why investors might want to buy the semiconductor equipment firm heading into its Q1 fiscal 2020 earnings release on Wednesday, February 12.

The semiconductor industry is historically cyclical, and last year was rough as companies saw their earnings and revenues fall against hard-to-compare periods. Despite the top and bottom line declines, many chip stocks surged in 2019 after a 2018 selloff devalued the firms that will continue to help fuel the technology market for years to come from Apple AAPL to Microsoft MFST.

Semiconductor stocks also climbed in 2019 because companies were set to report growth in 2020 after a down year. And some early 2020 results do indeed show that the chip market looks poised for a comeback. Industry heavyweights Samsung SSNLF, Intel INTC, and Taiwan Semiconductor Manufacturing Co. TSM have already posted solid quarterly results this year and raised their outlooks.

Applied Materials is a leading semiconductor equipment company. Its offerings help produce new chips and advanced displays. AMAT executives expect to benefit from the continued expansion of the big data age and see the emergence of Artificial Intelligence and other new computing tech as key longer-term growth drivers.

Applied Materials is also focused on figuring out what’s next as classic Moore's law scaling slows. This is why the firm has focused on what it calls the new playbook for semiconductor design and manufacturing, which includes five main elements: “New architectures, new devices and 3D structures, new materials, new ways to shrink the feature geometries, and new ways to connect chips together.”

In the fourth quarter, management upped their Q1 2020 guidance, citing growth in key areas such as foundry logic. The Santa Clara, California-based company also pointed to innovations within data centers, growing cloud computing demand and the roll out of 5G. “While we are carefully managing all non-R&D spending, we're investing more than ever in new capabilities and products to accelerate the new playbook,” CEO Gary Dickerson said on AMAT’s Q4 earnings call.

The nearby chart shows that AMAT stock has gone on a solid run over the last five years and recovered from its 2018 downturn. Applied Materials shares have soared 115% since the end of December 2018, to outpace the likes of Nvidia NVDA and Micron MU. AMAT stock has been a little up and down in the past three months, but it is up 11% during this stretch and sits just off its 52-week highs as of Friday morning.

Meanwhile, AMAT is trading at a discount compared to the Semiconductor Equipment - Wafer Fabrication average, as it has for the past five years. AMAT is currently trading at 16.1X forward earnings. This comes in well below its industry’s 23.1X average, rival Lam Research’s (LRCX - Free Report) 17.7X, and its 12-month high of 18.6X.

On top of that, AMAT’s industry ranks No. 5 out of our 255 Zacks industries at the moment. The company also returned roughly $3.2 billion to shareholders through dividends and share repurchases in fiscal 2019. AMAT’s dividend yield sits at 1.33%, which is not too far off LRCX’s 1.41% and the 10-year U.S. Treasury’s 1.59%. 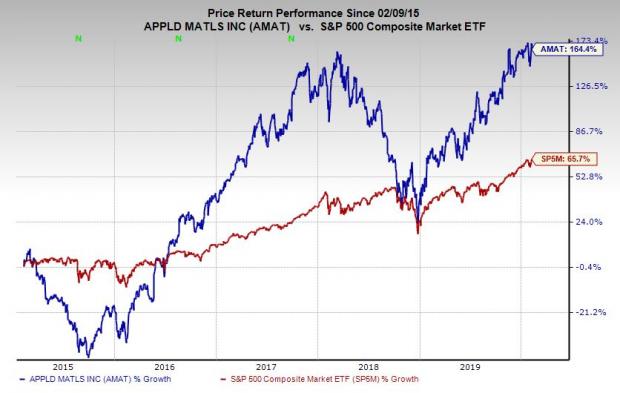 At the bottom end of the income statement, Applied Materials adjusted earnings are projected to pop 25.3% in 2020, with 2021 expected to come in another 17.5% stronger.

The earnings estimate positivity helps Applied Materials hold a Zacks Rank #1 (Strong Buy). And the stock appears to be worth considering ahead of earnings as part of a larger semiconductor industry comeback this year and beyond.