Kinross Gold Corporation (KGC - Free Report) swung to a profit of $521.5 million or 41 cents per share in fourth-quarter 2019 from a loss of $27.7 million or 2 cents in the year-ago quarter. The bottom line in the reported quarter was supported by non-cash (after-tax) impairment reversals worth $293.6 million.

Barring one-time items, adjusted earnings were 13 cents per share, up from a penny per share a year ago. It also topped the Zacks Consensus Estimate of 10 cents.

Revenues were $3,497.3 million for the full year, up around 9% year over year, supported by higher gold prices.

Attributable gold production was 645,344 ounces in the reported quarter, up around 6% year over year. Production was driven by record quarterly production at the Tasiast mine as well as higher production across Round Mountain and Bald Mountain.

Average realized gold prices were $1,485 per ounce in the quarter, up 21% from the year-ago quarter.

Margin per gold equivalent ounce sold was $741 in the fourth quarter, up 53% year over year.

Adjusted operating cash flow jumped nearly three-fold year over year in the fourth quarter to $387.6 million. Cash and cash equivalents were $575.1 million at the end of 2019, up around 65% year over year.

Long-term debt was $1,837.4 million at the end of the year. Notably, the company has no scheduled debt maturities until September 2021.

Kinross expects production of around 2.4 million (+/- 5%) gold equivalent ounces for 2020. The modest expected decline in production from the 2019 level (of around 2.5 million) is mainly due to care and maintenance at the Maricunga mine and expected lower production at Paracatu, partly offset by an anticipated higher production at Tasiast and Fort Knox.

The company expects production to be relatively flat on a quarter-over-quarter basis through 2020, with a modest rise in the fourth quarter.

Shares of Kinross have rallied 55.7% in the past year compared with the industry’s 41.1% growth. 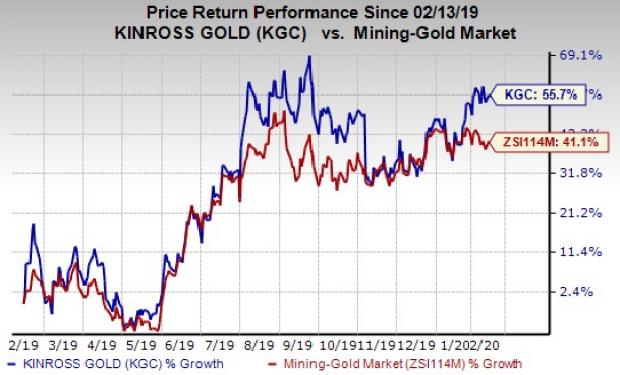 Pretium Resources has projected earnings growth rate of 105.3% for 2020 and carries a Zacks Rank #2. The company’s shares have gained around 2% over a year.

Flowserve (FLS) to Post Q4 Earnings: Is a Beat in Store?