The bottom line in the reported quarter was hit by $1.1 billion in non-cash charges. The company took a pre-tax charge of $530 million related to the idling of the Colonsay potash mine in Saskatchewan, Canada. It also a recorded a charge of $589 million associated with goodwill impairment in the Phosphates segment in the quarter.

Barring one-time items, adjusted loss per share was 29 cents, much wider than the Zacks Consensus Estimate of a loss of a penny.

Net sales fell roughly 18% year over year to $2,076.3 million in the quarter, hurt by reduced sales volumes and phosphate prices. The figure, however, beat the Zacks Consensus Estimate of $1,941.5 million. The company saw continued weakness in key global fertilizer markets in the quarter.

Net sales in the Phosphates segment were $698 million in the quarter, down around 25% year over year due to lower sales prices that more than offset modestly higher volumes. The segment’s gross margin per ton was at a loss of $52. Margin was partly impacted by lower realized prices.

Potash division’s sales dropped roughly 33% year over year to $395 million as lower sales volumes more than offset higher prices. Gross margin per ton in the quarter was $61, down around 31% year over year, due to higher costs per ton resulting from reduced operating rate.

Net sales in the Mosaic Fertilizantes segment came in at $864 million, down around 11% year over year, hurt by lower prices. Gross margin per ton fell to $32 from $56 in the year-ago quarter as lower prices more than offset synergies.

Net loss for 2019 was $2.78 per share, compared with earnings of $1.22 per share a year ago. The results were hurt by charges associated with asset portfolio optimization and goodwill impairment in the Phosphates segment.

Mosaic ended 2019 with cash and cash equivalents of $519.1 million, down around 39% year over year. Long-term debt was essentially flat year over year at around $4,525.5 million.

The company realized around $330 million in annual net synergies from the Vale Fertilizantes acquisition in 2019, above its original target of $275 million.

Moving ahead, Mosaic sees strong global demand for fertilizers in 2020 based on solid worldwide demand for grains and oilseeds and strong farm economics.

The company expects China to be a major factor for phosphate market fundamentals this year in the wake of the coronavirus outbreak. Per Mosaic, much of the phosphate production in Hubei province has been idled or curtailed due to coronavirus. The company envisions this decline in supply coupled with limited new capacity in other parts of the world to contribute to a sustained tightening of phosphate market fundamentals.

The company also noted that production curtailments that started in second-half 2019 are bringing the potash market into balance this year. It sees strong demand in the Northern Hemisphere for spring. Mosaic also expects a typical surge in activity in the Southern Hemisphere in the third quarter of 2020. 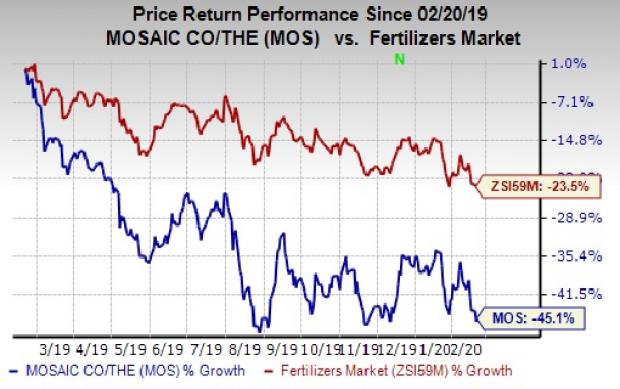 NovaGold has projected earnings growth rate of 11.1% for current fiscal and carries a Zacks Rank #2 (Buy). The company’s shares have surged around 148% over a year.