Buy this Data Storage Tech Stock for its Dividend Yield to Combat Coronavirus?

Western Digital (WDC - Free Report) shares have tumbled 50% in the last month as the coronavirus-based market selloff continues. But the downturn has boosted the data storage firm’s dividend-yield into an attractive range and its outlook remains strong.

The 11-year bull run seemingly ended in the blink of any eye, as the coronavirus spreads outside of China, in the U.S. and beyond. Monday then saw the Dow fall 13%—its second-worst day ever—to close at its lowest level since May 2017. Volatility seems poised to remain until there is a better understanding of when the spread will slow and economic activity can return to normal.

Apple (AAPL - Free Report) and others have closed their stores outside of China and last week chipmaker Broadcom (AVGO - Free Report) pulled its full-year guidance due to coronavirus uncertainty. Clearly, there are reasons for Wall Street and investors to be nervous about the near-term future.

But with the S&P 500 down over 30% in a month, some investors are likely on the hunt for some stocks to buy at a discount, or at least add to their watchlists. And Western Digital might be a candidate given its fall, outlook, and more. 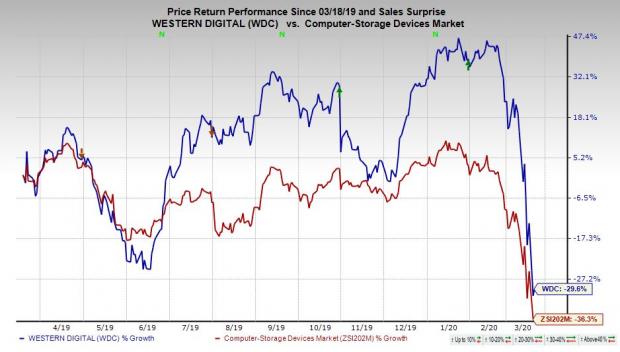 Western Digital is a data storage firm that operates under its namesake brand, as well as SanDisk and others. The firm’s offerings include everything from disk-drives to NAND flash memory. Investors should also note that the company topped our Q2 fiscal 2020 earnings and revenue estimates in late January, and its Q3 guidance came in well above previous expectations.

Perhaps more importantly, WDC announced in early March that it appointed David Goeckeler as its new CEO, this came after Steve Milligan said in October 2019 that he would step down.

The new chief executive comes from Cisco (CSCO - Free Report) . “With large-scale hard disk drive and semiconductor memory franchises, Western Digital is strongly positioned to capitalize on this emerging opportunity and push the boundaries of both software and physical hardware innovation within an extremely important layer of the technology stack,” Goeckeler said in prepared remarks.

The nearby chart shows that WDC stock has tumbled 30% over the last year, driven by its 50% decline over the last month. Western Digital stock touched a new 52-week low of $31.00 a share Tuesday. This marked a roughly 57% decline from its late January highs and might set up a solid entry point for interested investors.

On the valuation side, Western Digital is currently trading 6.6X forward 12-month Zacks earnings estimates. This marks a discount against its industry’s 13.8X average, as well as its own one-year high of 30X and its 16X median.

Moving on, our current Zacks estimates call for the firm’s adjusted Q3 earnings to soar from $0.17 a share in the year-ago period to $0.97 per share. Meanwhile, its third quarter sales are projected to jump 16% to $4.25 billion.

WDC’s fiscal 2020 earnings are projected to slip, and its sales are only expected to climb 2%. However, peeking further ahead, the company’s earnings are expected to skyrocket 123% above our current-year estimate on 13% stronger sales that would see it reach $19.13 billion.

We can also see that Western Digital’s earnings revisions have trended heavily in the direction recently, with its FY20 and FY21 consensus estimates up 19% and 13%, respectively. This earnings revision positivity helps WDC earn a Zacks Rank #1 (Strong Buy).

Western Digital also holds “A” grades for both Value and Momentum in our Style Scores system and its Computer- Storage Devices industry rests in the top 7% of our more than 250 Zacks industries. The market volatility likely won’t go away any time soon, but WDC could be a stock that longer-term investors might want to consider.