Read MoreHide Full Article
Canadian Solar Inc. (CSIQ - Free Report) recently announced the completion of a 17.7-megawatt peak (MWp) subsidy-free solar portfolio sale in Italy to Sonnedix. These solar plants are expected to produce approximately 34 gigawatt hours (GWh) of clean energy per annum. Canadian Solar expects to recognize revenues from the sale during the first quarter of 2020.
A Brief Insight Into the Sale
The recent solar portfolio sale includes five solar photovoltaic (PV) plants, operational since February 2020, jointly developed by Canadian Solar and Manni Energy. The energy produced is sold to TrailStone Renewables GmbH through a recently signed 10-year power purchase agreement (PPA), resulting in one of the longest PPAs for subsidy-free solar portfolios in Italy, to date.
Canadian Solar & Italian Solar Market
Given the size of Italy's economy and abundant solar resources, the nation is expected to be one of the fastest-growing markets in Europe for solar energy. Recently, Canadian Solar secured a credit fund worth approximately $60 million from Italian banking group, Intesa Sanpaolo, to build a portfolio of 12 solar PV projects across different municipalities of Italy. Considering the latest project divestiture, such robust expansion within Italy’s booming solar PV market will further strengthen the company’s prospects in this nation.
Italy remains on track to meet its ambitious plans of 30% renewables in gross final energy consumption by 2030, which includes 50.9 GW of solar PV. Notably, Canadian Solar has been more active in the Italian subsidy-free market since 2018. It currently has more than 900 MWp of project pipeline under permitting, making it one of the leading solar players in the country and solidifying its position in the Italian solar market. The latest project sale will add further impetus to that.
A Brief Note on Canadian Solar’s Global Presence
Canadian Solar currently caters to a geographically-diverse customer base spread across key markets in the United States, China, Japan, the U.K. and Canada as well as emerging markets in Italy, India, Mexico and Germany, among others.
Per a report by the International Renewable Energy Agency (IRENA), global electricity generation from solar energy is expected to increase to nearly 360 GW per year by 2050 from the current level of 109 GW. Evidently, solar players like  Canadian Solar, SunPower Corp. (SPWR - Free Report) , First Solar Inc. (FSLR - Free Report) and JinkoSolar (JKS - Free Report) are also expected to reap the  benefits of this growing solar market.
SunPower won awards worth more than $500 million in 2019 and acquired bookings worth 26 megawatts in the fourth quarter of 2019. Such contract wins indicate solid revenue growth opportunities, going ahead.
First Solar expects to increase its Series 6 manufacturing capacity to 6 GW by 2020 and 8 GW by 2021-end, given the growing global demand for solar modules. Meanwhile, JinkoSolar projects total solar module shipments of 18-20 GW in 2020, indicating a year-over-year improvement of approximately 35%.
Price Performance & Zacks Rank
In a year's time, shares of this Zacks Rank #3 (Hold) company have plunged 22.1% compared with the industry’s 0.7% decline. You can see the complete list of today’s Zacks #1 Rank (Strong Buy) stocks here. 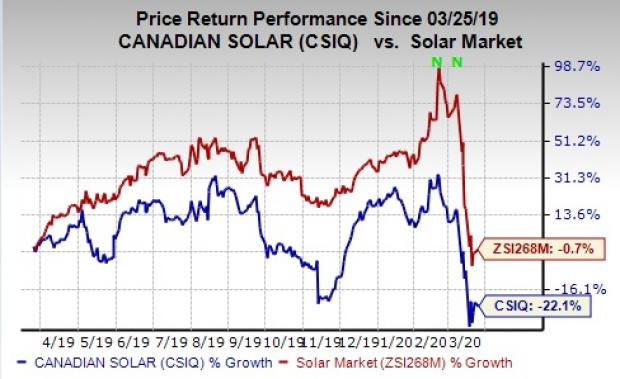 Biggest Tech Breakthrough in a Generation
Be among the early investors in the new type of device that experts say could impact society as much as the discovery of electricity. Current technology will soon be outdated and replaced by these new devices. In the process, it’s expected to create 22 million jobs and generate $12.3 trillion in activity.
A select few stocks could skyrocket the most as rollout accelerates for this new tech. Early investors could see gains similar to buying Microsoft in the 1990s. Zacks’ just-released special report reveals 8 stocks to watch. The report is only available for a limited time.
See 8 breakthrough stocks now>>

Exact Sciences Grows on New Deals, Down on Coronavirus Scare