JPMorgan or Citigroup: Which is Placed Better Amid Current Crisis?

The current global economic scenario has made people wary of investing in stock markets of late, especially bank stocks. This is because fears surrounding the coronavirus outbreak have restricted business activities. In fact, the interest rate cuts announced by the Federal Reserve are expected to hurt banks’ interest income growth (the most important indicator of their profitability).

Further, suspension of buybacks is likely to impact banks’ earnings per share. In fact, they might have to face an increased possibility of loan losses on plummeting oil prices, which are currently trading in the low 20s.

Thus, global factors suggest that holding bank stocks can be risky for investors currently and hence they should get rid of them.

However, the Fed has come up with a slew of measures to support the U.S. economy with a continuous flow of credit. Its decision is expected to support banks’ growth to some extent and hence maintain stability within the financial system.

In fact, the fundamentals of most banks suggest that they are well-poised to combat the current situation without collapsing.

Today, we will discuss two big banks in the United States — JPMorgan (JPM - Free Report) and Citigroup (C - Free Report) — and see which is better placed amid the current crisis.

Let's take a closer look at how JPMorgan and Citigroup stand against each other in terms of certain key metrics.

While the debt-to-equity ratio of both companies is above the industry, JPMorgan is better placed than Citigroup.

ROE is a measure of a company’s efficiency in utilizing shareholders’ funds. JPMorgan’s ROE is 15.19%, while that for Citigroup stands at 10.32%. The industry average ROE is currently 11.95%.

Thus, JPMorgan is better placed than Citigroup as its ROE is higher than the industry.

In terms of both P/B and P/E (F1) ratios, Citigroup is currently trading at a discount as compared with the broader industry.

For JPMorgan, the Zacks Consensus Estimate for 2020 earnings is pegged at $10.57, indicating a decline of 1.4% from the year-ago reported figure. The stock has a long-term (three-five years) expected earnings growth rate of 5%.

For Citigroup, the consensus estimate for earnings stands at $8.48 for 2020, suggesting an increase of 11.9% from the year-ago reported number. The stock has a long-term expected earnings growth rate of 10.5%.

Thus, based on the earnings growth projection, Citigroup has an edge over JPMorgan.

JPMorgan’s total net revenues increased, witnessing a CAGR of 5.2% over the last five years (2015-2019). Moreover, the Zacks Consensus Estimate for the company’s sales is pegged at $116.3 billion for 2020, implying marginal growth from the previous year’s reported number.

While JPMorgan has been witnessing consistent growth in revenues over the past five years, Citigroup has an edge over JPMorgan in terms of expected sales growth.

Both companies have been deploying capital in terms of dividend payments to enhance shareholder value.

While both companies have a dividend yield lower than the industry, Citigroup is better placed than JPMorgan.

Shares of Citigroup and JPMorgan have been witnessing drastic declines for the past few months due to the current crisis. However, if we compare the price performance of the two stocks over the past three years, we can see that shares of JPMorgan have gained 5.2%, while Citigroup lost 28.2%. In addition, during the same period, the industry has recorded a decline of 23%. Therefore, JPMorgan performed better than Citigroup. 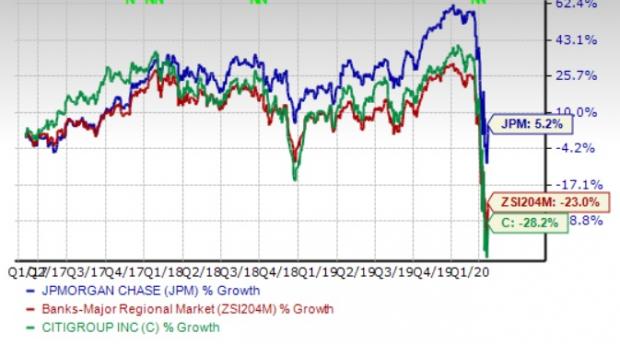 Our comparative analysis indicates that JPMorgan is better poised than Citigroup in terms of price performance, and superior leverage ratio and ROE. However, Citigroup wins on undervaluation, better dividend yield, and better sales and earnings growth projections.