Will Low Interest Rates Create a Headwind for Prudential?

Prudential Financial, Inc. (PRU - Free Report) has been gaining momentum on strong premiums earned from its life insurance business and high net investment income, which, in turn, has been boosting top-line growth.

However, given the coronavirus outbreak, the Federal Reserve in the United States slashed interest rates by 50 basis points on Mar 3. Following the rate cut, the recent announcement of the Fed to lower interest rates to zero-level comes as disappointing news for most life insurance companies in the United States. The rate cut is one of the measures to stimulate the U.S. economy, which has been sluggish due to the COVID-19 pandemic.

Such resortment to zero-interest rates can be traced back to the recession period in 2008.

With the economy being in jeopardy, the Fed also aimed at injecting liquidity into the U.S economy by purchasing Treasurys and mortgage-backed securities worth $700 billion.

The pandemic, which is adversely impacting the U.S. economy, is also expected to dent top-line growth of most life insurance companies in the United States and Prudential is no exception.

Prudential’s exposure to products like annuities and universal life, which guarantee minimum return, is also likely to affect it. When interest rates are lowered, it increases the value of the guaranteed liabilities for the company. 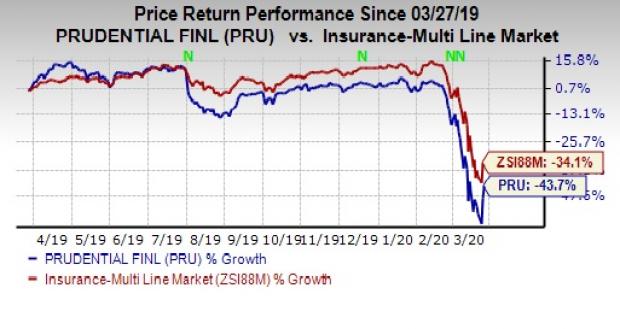 Nevertheless, we believe that the company’s enhanced suite of retirement and life insurance products is likely to drive its shares going forward. Prudential’s vast distribution network and superior brand image are also expected to give it a competitive edge.