Alaska Air Group’s (ALK - Free Report) subsidiary Alaska Airlines plans to reduce capacity by 70% for April and May due to “historic and unprecedented” decline in demand as coronavirus concerns evolve. The company is witnessing more than 80% drop in demand. Given the current crisis, the carrier expects to make such large number of flight cancelations in the next several months as well.

To cope with this deep crisis, Alaska Airlines has now suspended cash dividend. The company had already suspended share buybacks. Some other cost-cutting measures taken by the airline are slashing officer pays through Sep 30, laying off contractors and temporary workers, reducing work time for management employees, freezing annual pay hikes and asking employees to show interest in taking leave of absence voluntarily (the airline, however, will continue to ensure health and travel benefits).

The carrier also drew down $400 million on its line of credit and closed another secured loan for $425 million. It is also putting a check on all other spending, such as those on aircraft, buildings, equipment, leases etc.

Alaska Airlines along with other U.S. passenger airlines are seeking approval for an aid package, which if passed, might bring them $50 billion.

Shares of Alaska Air Group have plunged more than 53% since the beginning of February due to the coronavirus-related woes. 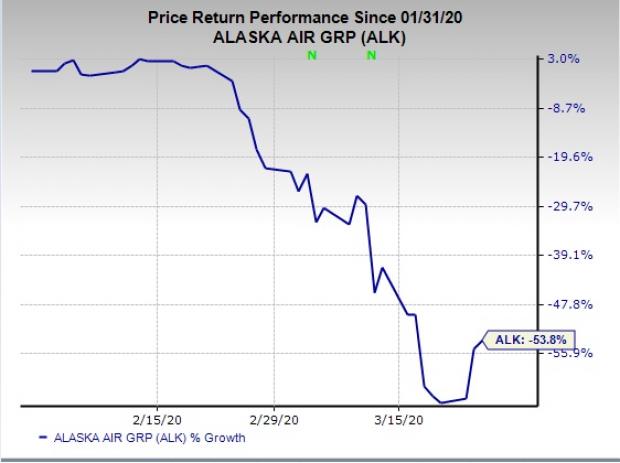 United Airlines to Cut Domestic Capacity by 52% in April