The deal will expand Enphase’s footprint in the expanding French solar market.

In recent times, the demand for solar energy in France has been increasing rapidly. Under its 10-year energy plan, the French government has expressed the desire to install renewables capacity of more than double to 113 gigawatts (GW) by 2028 mainly by adding more wind and solar powers. It expects a solar photovoltaic capacity of 35.6-44.5 GW in 2028, with 20.6 GW installed by 2023.

The French government has also planned to substantially increase investment in renewable assets. It aims to invest $77.06 billion (71 billion euros) in 2019-2028. The French government said that the new funds will increase its solar power generation to five-fold. We believe that with such positive indications, the recent deal is creating further growth opportunities for Enphase in France.

Being a global energy technology company, Enphase shipped more than 25 million microinverters across 130 countries. The solar microinverter market is booming and still has a long way to go.  Per a report by the International Renewable Energy Agency (“IRENA”), global electricity generation from solar energy is expected to increase to nearly 360 GW per year by 2050 from the current level of 109 GW.

With the increasing solar power demand, companies, which operate globally, like Canadian Solar CSIQ and JinkoSolar JKS are expected to grow further. 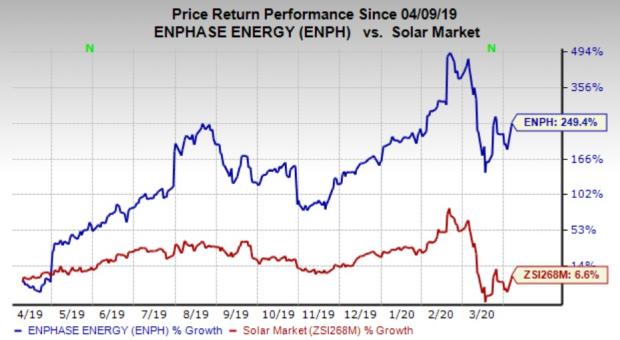