Notably, Warren Buffett’s Berkshire Hathaway sold its entire stake in the U.S. airline industry due to the coronavirus impact, which brought the entire space to its knees. “The world has changed for the airlines,” said Warren Buffett, who is considered one of the greatest  investors of all times, during Berkshire’s virtual shareholders' meeting.

1. United Airlines, carrying a Zacks Rank #3 (Hold),incurred a loss (excluding $4.29 from non-recurring items) of $2.57 per share, comparing favorably with the Zacks Consensus Estimate of a loss of $3.25. Even though operating revenues of $7,979 million decreased 16.8% year over year, the same marginally beat the Zacks Consensus Estimate of $7,976 million. The year-over-year plunge was due to the 19% drop in passenger revenues, which accounted for bulk (88.5%) of the top line

2. American Airlines posted a loss (excluding $2.61 from non-recurring items) of $2.65 per share in the first quarter, comparing unfavorably with the Zacks Consensus Estimate of a loss of $2.16. The company reported earnings per share of 52 cents in the year-ago quarter. Operating revenues of $8,515 million declined 19.6% year over year and also fell short of the Zacks Consensus Estimate of $9,146.7 million. Passenger revenues decreased 20.5%.

3. Alaska Air Group incurred a loss of 82 cents per share (excluding $1.05 from non-recurring items) in the first quarter of 2020, narrower than the Zacks Consensus Estimate of a loss of $1.27. In the year-ago quarter, the company reported earnings of 17 cents. This downturn is due to the unprecedented drop in air travel demand following the pandemic situation.

4. Gol Linhas Aereas Inteligentes’ (GOL - Free Report) first-quarter earnings of 20 cents per share (excluding $3.08 from non-recurring items) increased year over year on cost-saving initiatives.Net operating revenues of $710.9 million missed the Zacks Consensus Estimate of $929.8 million and also declined year over year. Consolidated revenue passenger kilometers (RPK) — measure for revenues generated per kilometer per passenger — were down 6.4% year over year. The metric declined 4.7% and 16% on the domestic and international front, respectively.

5. Hawaiian Holdings’ first-quarter loss (excluding $2.40 from non-recurring items) of $1 per share was wider than the Zacks Consensus Estimate of a loss of 74 cents. The carrier reported earnings of 67 cents in first-quarter 2019. Moreover, quarterly revenues of $559.1 million missed the Zacks Consensus Estimate of $564 million and fell 14.9% year over year as well.

Due to the plummeted travel demand amid the COVID-19 pandemic, passenger revenues representing majority (90%) of the top line decreased 16.3% year over year. Airline traffic, measured in revenue passenger miles, deteriorated 10.1% year over year to 3.71 billion in the quarter under review. Capacity measured in available seat miles (ASMs) inched up 2.6% to 4.97 billion. Load factor (percentage of seats filled by passengers) contracted 105 basis points to 74.6% in the reported quarter as capacity expanded while traffic declined.

The following table shows the price movement of airline over the past week and during the past six months. 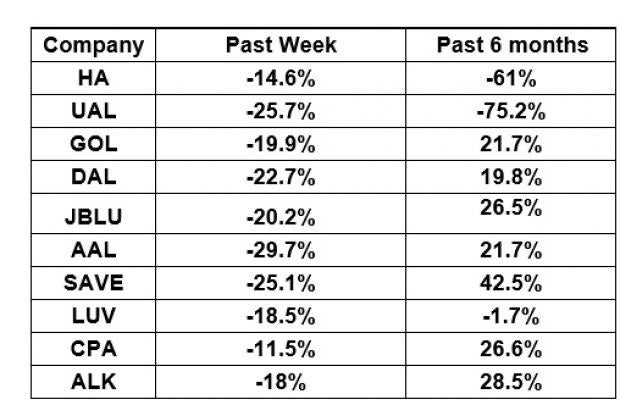 Investors will keenly await first-quarter 2020 earnings reports of SkyWest and JetBlue Airways, scheduled to be released on May 7.