Revenues of $612.8 million surpassed the Zacks Consensus Estimate of $591.8 million. The figure was up 0.5% from the prior quarter but down 17.7% from the year-ago quarter.

The sequential improvement in the first quarter results highlights that the company has recovered from the sluggish second-half 2019.

However, coronavirus-induced disruptions remained a major overhang. Factory shutdowns especially in China as a result of the ongoing pandemic impacted the company’s performance during the reported quarter. Further, COVID-19 related additional costs were concerns.

Additionally, weakening automotive market and slowdown in the oil and gas, avionics impacted the results negatively.

Notably, Vishay’s book-to-bill ratio was 1.17 at the end of the first quarter.

Coming to price performance, Vishay has lost 28.6% in the past year compared with the industry’s decline of 12.9%.

Coronvirus pandemic-induced uncertainty and economic volatility globally are major concerns for the company in the near term.

Nevertheless, the company’s continued focus toward expanding manufacturing capacities remains a tailwind. Moreover, growth opportunities across all the product segments remain a positive.

All these are likely to instill investor optimism in the stock. 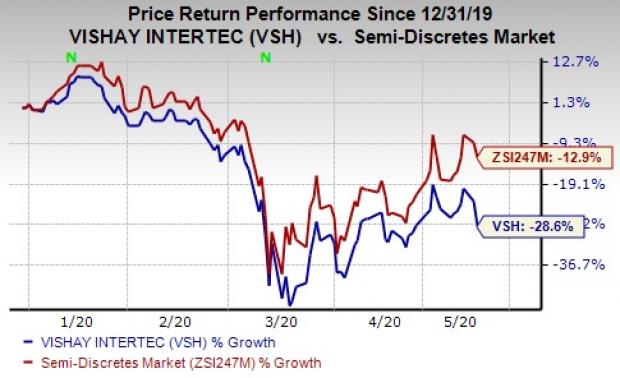 Resistors: This product segment generated revenues of $159 million (26% of total revenues), down 13% year over year. Low volume production and manufacturing inefficiency were overhangs. Nevertheless, recent inventory corrections in the supply chain were positives. Notably, the book-to-bill ratio for this product was 1.05 in the reported quarter.

Inductors: This product line generated $74 million revenues (12% of total revenues), which increased 4% on a year-over year basis. The book-to-bill ratio for this product was 0.98 at the end of the reported quarter. The company’s well-performing magnetics drove its specialty business.

However, sluggish auto sector remained a concern for this product segment.

MOSFET: This product line generated revenues of $117 million (19% of total revenues), declining 15% year over year. The book-to-bill ratio for this product was 1.12 at the end of the reported quarter. The segment had been bearing the brunt of inventories destocking in the supply chain.

Capacitors: This product line generated revenues of $93 million (15% of total revenues), down 21% year over year. The book-to-bill ratio for this product was 1.2 in the reported quarter. Lower volume production and unfavorable product mix remained a major headwind.

Nevertheless, this product line witnessed solid momentum across America and Europe. Further, growing opportunities for capacitors in the areas of power transmission and electro cars in Asia remained tailwinds.

Diodes: The segment generated revenues of $115 million (19% of total revenues), declining 31% from the year-ago quarter. This can primarily be attributed to inventory reductions in the supply chain. Further, factory shutdowns in China due to COVID 19 acted as a woe. Notably, the book-to-bill ratio for this product was 1.36 during the quarter under review.

In first-quarter 2020, gross margin came in at 24%, contracting 430 basis points (bps) on a year-over-year basis. Extra expenses that it incurred due to COVID-19 led disruptions were overhangs.

Selling, general and administrative expenses were $99.8 million, declining 3.5% year over year. However, as a percentage of total revenues, the figure expanded 240 bps from the year-ago quarter.

Consequently, operating margin contracted 680 bps on a year-over-year basis to 7.7%.

In the first quarter, the company generated $34.5 million of cash from operations, down from $84.4 million in the previous quarter.

The company’s free cash flow in the reported quarter came in $10.2 million, decreasing from $28.1 million in the prior quarter.

For second-quarter 2020, Vishay expects total revenues in the range of $540 million to $580 million.

Further, the company anticipates the second-quarter gross margin between 21-22%.

Long-term earnings growth rate for Chegg, InterDigital and ASE Technology is pegged at 30%, 15% and 26.63%, respectively.