Shares of Moderna, Inc. (MRNA - Free Report) fell more than 10% on Tuesday on skepticism related to data announced on Monday by the company from a phase I study evaluating its mRNA-based COVID-19 vaccine candidate, mRNA-1273. The company’s stock was also down 6% in after-hours trading on May 19.

The study is being conducted by National Institute of Allergy and Infectious Diseases (NIAID). Please note that, Moderna has discovered mRNA-1273 and NIAID is developing the candidate in the phase I study under its own investigational new drug (“IND”) application. Moderna will continue development of the candidate in later phases of clinical studies.

Starting the year with its stock price below $20, the company’s shares touched an all-time of $87 on May 18, following the announcement of the phase I study data.

However, a report published on statnews.com raised a few questions regarding the announced clinical data on mRNA-1273, which presumably led to the decline in the stock.

Moderna’s shares have skyrocketed 266.4% so far this year against the industry’s increase of 8.7%, primarily due to the company’s progress with its coronavirus vaccine candidate. 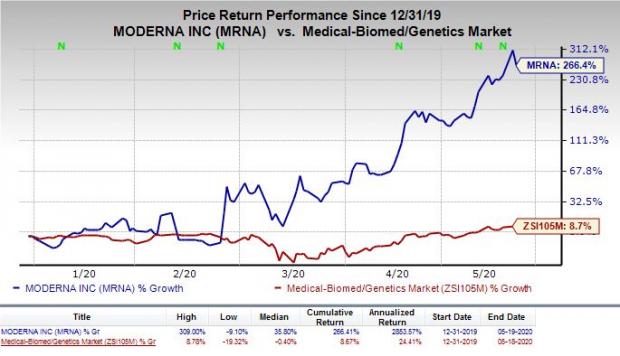 The company announced earlier this week that patients vaccinated with mRNA-1273 achieved levels of antibodies similar or higher than those typically found in a patient who recovered from COVID-19 naturally.

The report on statnews.com concluded, after taking into account several vaccine experts, that it is impossible to ascertain the effectiveness of mRNA-1273 as pictured by the company. First, the report states that Moderna revealed very little information with almost no actual data.

Second, NIAID has not released any updates from the clinical study on mRNA-1273 and also declined to comment on Moderna’s announcement.

The statnews.com report states that data from only eight patients out of total 45 and also only two weeks of data following the second dosage also raise concerns related to the durability of the data. Data on majority of patients as well as longer-term data will likely provide clarity on the vaccine’s efficacy. However, we note that the phase I study primarily evaluates a candidate’s safety in human volunteers rather than efficacy.

Although questions raised by statnews.com report seem genuine with no specific data being made available by Moderna or NIAID, we note that the company has received funding of nearly $500 million from Biomedical Advanced Research and Development Authority ("BARDA"), a government agency. We believe BARDA is funding Moderna’s coronavirus vaccine development due to its strong potential. The FDA has also approved the company’s investigational new drug application to initiate a phase II study to evaluate mRNA-1273, which is expected to begin soon. A phase II study is also set to start in July.