argenx Up on Positive Data from Pivotal Efgartigimod Study

argenx (ARGX - Free Report) announced positive top-line data from the pivotal study — ADAPT — evaluating intravenous (“IV”) administration of its lead pipeline candidate, efgartigimod, in patients with myasthenia gravis (“MG”), a rare neurological autoimmune disease. Data from the study showed that the candidate met the primary endpoint. The company plans to file a biologics license application (“BLA”) seeking approval for efgartigimod as a treatment for MG patients to the FDA by the end of 2020.

Shares of argenx surged more than 36% on May 26 following the study data announcement. The company will have the first approved product following a potential approval for efgartigimod. Shares of the company have gained 32.2% so far this year compared with the industry’s increase of 7.9%. 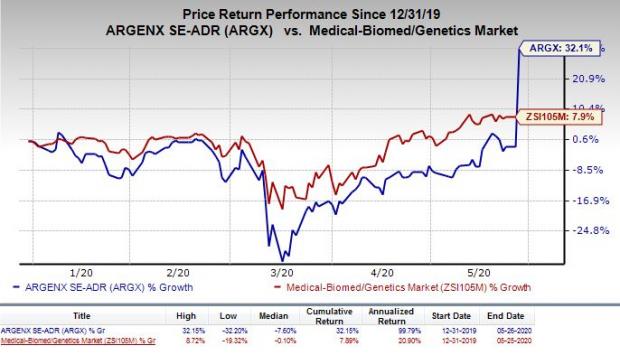 Please note that the primary endpoint of ADAPT study was defined as the percentage of responders on the Myasthenia Gravis Activities of Daily Living (MG-ADL) score in patients with acetylcholine receptor-antibody positive (AChR-Ab+) generalized myasthenia gravis. Responders are defined as having at least a two-point improvement on the MG-ADL score for at least four consecutive weeks.

Data from study showed that 67.7% of AChR-Ab+ patients treated with efgartigimod were responders compared to 29.7% for placebo.

Moreover, 63.1% of AChR-Ab+ patients responded to treatment with efgartigimod compared to 14.1% for placebo, as measured by Quantitative Myasthenia Gravis (“QMG”) score. Patients who responded to efgartigimod had at least three-point improvement on the QMG score for at least four consecutive weeks.

Treatment with efgartigimod also achieved minimal symptom expression in 40% of AChR-Ab+ patients versus 11.1% for placebo. The candidate was also well tolerated in patients.

The company has enrolled 90% of patients from the ADAPT study in the ADAPT-Plus open-label extension study, for continued, long-term evaluation of the candidate.

Apart from MG, argenx is also evaluating efgartigimod in three other indications, namely primary immune thrombocytopenia, pemphigus vulgaris and chronic inflammatory demyelinating polyneuropathy. The company plans to announce a new indication for efgartigimod by the end of 2020.