Last year, the company had opened three clearance centers in Utica, MI; Spartanburg, SC; and Racine, WI. The current store openings will bring the total number of outlet and clearance stores to 11 in nine different states.

Notably, the first concept store type, OVERTIME, will offer a wide range of apparel, footwear and equipment products from well-known brands, including Nike (NKE - Free Report) , Adidas (ADDYY - Free Report) and Under Armour (UAA - Free Report) at up to 75% discount. The company is working on keeping inventory fresh for customers at these stores. It also noted that new markdowns will be added throughout the year.

Further, two OVERTIME stores in Connecticut and Maryland will start operating from today, while the one in Pennsylvania will be open from Jun 24.

Speaking of the second concept store, the company will open DICK'S Sporting Goods Warehouse at five locations. Customers will be offered upto 90% off on popular footwear and apparel brands. Such warehouses will also come with temporary pop-up-style shopping experience for the next six months. These warehouses are now open in Avon, IN; St. Peters, MO; North Olmstead, OH; South Hills, PA; and Brookfield, WI.

Moving on, DICK’S Sporting has reopened few stores since mid-April in sync with the CDC and local health guidelines following temporary store closures due to coronavirus. In this regard, roughly 80% of its stores are now open as of the end of May. Going ahead, it remains on track to reopen more stores in the second and third quarters of fiscal 2020. Moreover, the company highlighted that consolidated same-store sales have fallen 4% in the first four weeks of the second quarter compared with a 29.5% decline in the fiscal first quarter. This suggests that the reopening of stores is aiding sales.

That said, reopening stores and launching new ones to enhance the store business are likely to aid the company’s performance. Such endeavors have led this Zacks Rank #3 (Hold) stock to surge 140.4% in the past three months compared with the industry’s growth of 74.4%. You can see the complete list of today’s Zacks #1 Rank (Strong Buy) stocks here. 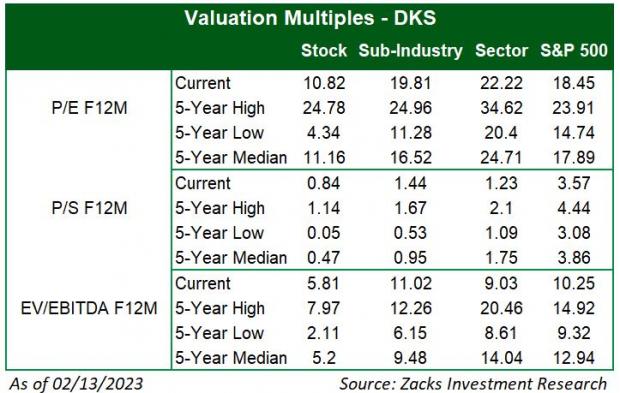