Valued at $333.4 million, the contract will cater to the government of Australia. The deal, expected to be completed by April 2025, has been awarded by the Naval Air Systems Command, Patuxent River, MD. The majority of the task will be carried out in San Diego and Palmdale, CA; Red Oak, TX and Linthicum, MD.

Cost-effectiveness combined with manned aircraft and zero mortality, which UAS offers, has been bolstering demand for military drones. This, in turn, has been driving demand for Triton, a next-generation UAS.

During the 2019-2025 period, the global unmanned aerial vehicle (UAV) market is anticipated to see a CAGR of 15.5% to $45.8 billion (per a report by Markets and Markets research firm). Notably, rise in the procurement of military UAVs by defense forces worldwide is one of the most significant factors, which might provide a boost to the UAV market.

With Northrop Grumman being a prominent defense major and an expert UAV manufacturer, the aforementioned projections for the market should boost this defense prime’s growth substantially.

To date, North America remains the largest market for UAV, driven by increasing use inborder and maritime surveillance activities, particularly in the United States and Canada.

In a year’s time, shares of Northrop Grumman have lost 5.2% compared with the industry’s 30.4% decline. 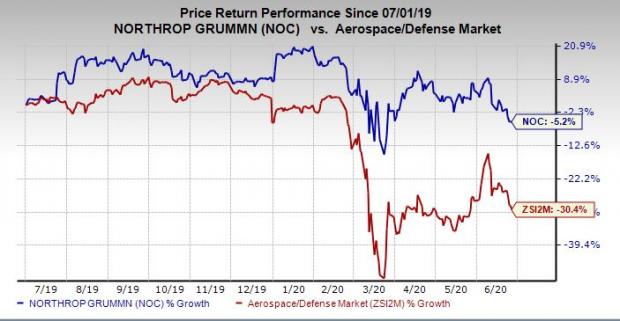 A better-ranked stock in the same sector is Embraer S.A. (ERJ - Free Report) , which holds a Zacks Rank #2 (Buy). You can see the complete list of today’s Zacks #1 Rank (Strong Buy) stocks here.

Embraer delivered a positive earnings surprise of 14.93% in the last reported quarter. The company has a long-term earnings growth rate of 17%.