JPMorgan (JPM) is not only biggest player in the banking industry, but it also has a well-earned reputation of being properly run. Wells Fargo (WFC - Free Report) had that kind of shining reputation some time back, but that is a thing of the past, at least at this stage. JPMorgan’s reasonably good quarterly results reconfirm its leadership position and likely provide read-throughs for its peers that are on deck to report results in the coming days.

As expected, both JPMorgan and Wells Fargo came out with one-time charges and gains related to the tax law changes. We will be seeing more of these one-time charges from other industry players in the coming days and some of these charges will be really big (Citigroup is expected to take a $20 billion charge), but we have to look past them and analyze real underlying trends. The tax legislation is producing these charges in the Q4 earnings reports, but we know for a fact that the new tax regime will benefit the profitability of banks (and other industries) directly as well as otherwise.

These tax-related charges and gains aside, the set up for bank earnings is not that different from other recent quarters. Net interest margins remain under pressure as a result of low interest rates, growth in loan portfolios has been decelerating and trading revenues remain weak. We may have been almost a decade removed from the last financial crisis that shook the industry to its roots, but banks have yet to reach their full earnings power.

JPMorgan did as good as possible in this relatively difficult earnings environment for banks, but we can’t say the same about Wells Fargo. JPMorgan’s loan portfolio increased +4%, with commercial & industrial loans up +6% and credit cards up +5%. The -1% decline Wells’ loan portfolio partly reflected the impact exit from auto lending, but there was weakness in other areas as well.

In terms of Finance sector scorecard, we have results from only 4 sector companies in the S&P 500 (out of 97 total) out already. But these 4 companies are some of the largest in the entire index and account for 19.3% of the sector’s total market capitalization in the index. Total earnings for these 4 Finance sector companies are down 1.4% from the same period last year on +4.3% higher revenues, with 75% beating EPS estimates and 50% beating top-line estimates.

For the Finance sector as a whole, total Q4 earnings are expected to be up +4.5% from the same period last year, which would follow -7% decline in the sector’s earnings due to weakness in the insurance industry as a result of the Gulf Coast hurricanes. Total Q4 earnings for the Zacks Major Banks industry, which accounts for roughly 45% of the sector’s earnings, are expected to be down -2.6% from the same period last year on +5.2% higher revenues. This would follow +6.5% earnings growth in Q3 for the industry and +10% growth in 2017 Q2.

The table below shows the sector’s Q4 earnings growth expectations at the medium-industry level contrasted with estimates for the following four quarters and actual results for the preceding three periods.

As you can see above, the sector’s earnings growth picture is expected to materially improve in the coming quarters.

Total earnings for the 26 S&P 500 members that have reported results already are up +13.6% from the same period last year on +9.1% higher revenues, with 73.1% beating EPS estimates and 80.8% beating revenue estimates.

The charts below compare the Q4 results thus far from the 26 index members with what we had seen from the same group of companies in other recent periods.

This is still a fairly small sample of results and broad trends are hard to discern at this stage. That said, the momentum on the revenue side that we saw in the preceding earnings season appears to be still in place.

Please note that estimates for Q4 held very favorably since the quarter got underway, unlike the revisions trend that we have been seeing over the last few years. This revisions trend is the most notable positive development on the estimate revisions front in recent years. Q4 estimates for 9 of the 16 Zacks sectors have come down since the start of the quarter, with estimates for the remaining 7 sectors going up. The strongest gains have been in the Energy, Industrial Products, Basic Materials and Technology sectors. 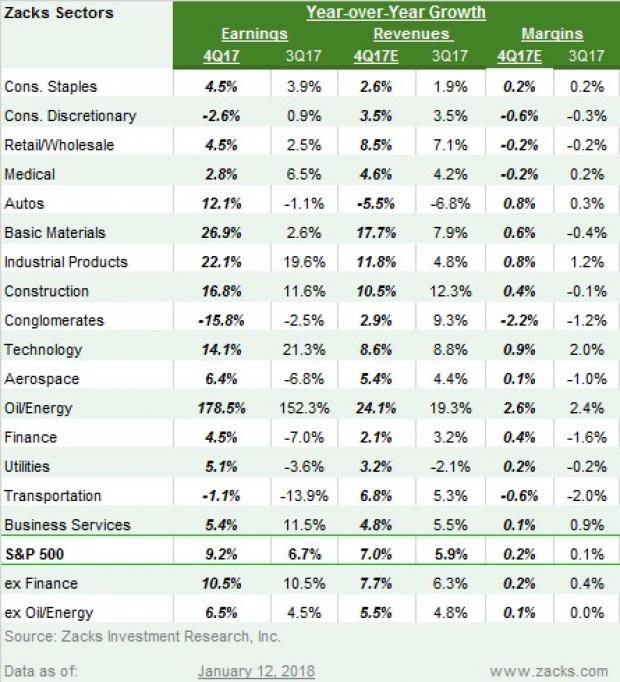 In terms of sector focus, the strongest growth in Q4 is coming from the Energy sector which benefits from easy comparisons. Excluding the Energy sector, the aggregate growth pace drops to +6.5% from +9.2%. Three of the 16 Zacks sectors are expected to have lower earnings in Q4 relative to the same period last year, with the Conglomerates sector as the weakest of them all (-15.8% lower earnings). 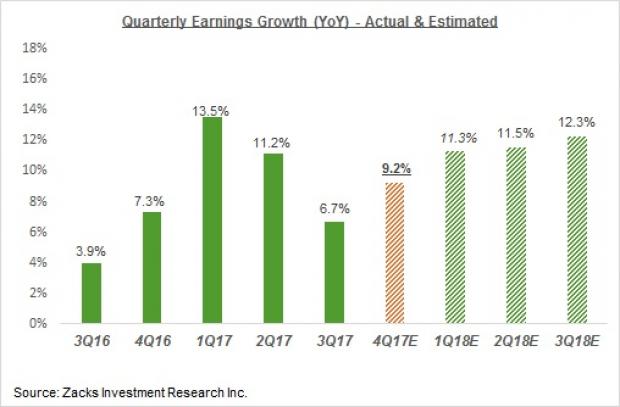 The chart below shows the weekly reporting calendar for the S&P 500 index. As you can see, we have 27 index members reporting results this week, with the earnings season really ramping up the following week.

Here is a list of the 54 companies including 27 S&P 500 and reporting this week.