Roku, Inc. (ROKU - Free Report) traded at new highs just around a month ago. But the streaming TV firm’s stock fell heading into its second quarter financial release in early August and then tumbled after its Q2 results on the back of what appear to be more near-term concerns.

Roku stock fell following its second quarter earnings release on August 4 for a variety of reasons. The most widely cited causes of concern centered on a slowdown in streaming TV viewing rates and supply chain-based setbacks in its hardware business. Total streaming hours across Roku devices and TVs slipped by 1 billion compared to the first quarter of FY21 to 17.4 billion hours.

The sequential decline makes sense given the widespread economic reopening that began to kick into high gear during the second quarter, which meant people were watching less TV. But streaming TV was popular long before the pandemic and it will be long after.

Plus, Roku crushed its broader industry on a year-over-year basis, with Roku’s streaming hours up nearly 19% globally, against a roughly 19% decline in traditional TV consumption and a 2% dip from the year-ago period across the broader streaming industry.

Meanwhile, Roku’s margins on its streaming player business got crushed due to supply chain setbacks. Its gross player margin fell to -5.9%, compared to +13.8% in Q1 and +7.5% in the year-ago period. “Tight component supply conditions and shipping constraints continued to increase costs faster than expected across all consumer electronics categories,” Roku wrote in prepared remarks.

“In Q2, we insulated consumers from increased costs for Roku players, which resulted in Player gross margin turning negative in the quarter.” 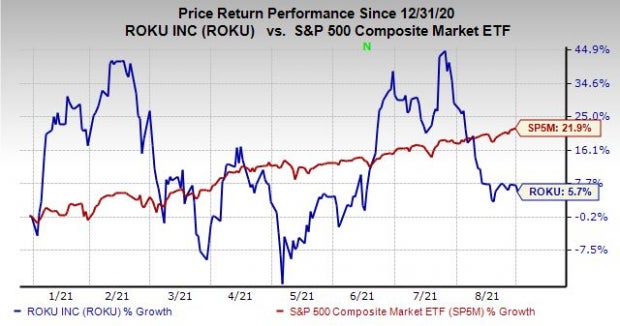 The main pullback culprits might pose some near-term worries, but Roku’s long-term bull case remains firmly in place. Roku’s small devices that plug into TVs and allow users to watch streaming TV content helped it become a mainstay in the industry.

Roku’s tech is built into smart TVs and it was the No. 1 smart TV OS sold in the U.S. in 2020, with nearly 40% market share. The company also sells wireless sound systems. But digital advertising and marketing is now its core business, with its ad-focused platform revenue accounting for over 80% of total second quarter sales.

Roku makes money by selling ad space across its marketplace and taking a share of streaming service subscription revenue and ad inventory. Roku allows marketers to buy targeted ads, promote their streaming movies, shows, platforms, and more. The category soared 117% in Q2, while its overall revenue climbed 81% to easily beat the Zacks estimate.

The firm also has its own channel that allows users to watch free, ad-supported streaming movies and TV shows. Roku is currently spending to build out its own original content library and grow internationally. Investors should note that its active accounts climbed 28% from the year-ago period to 55.1 million, while its monetized video ad impressions more than doubled YoY. 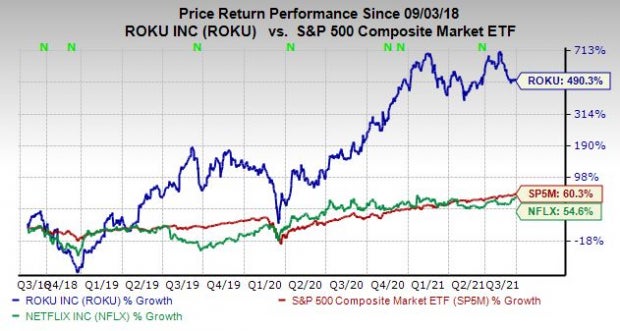 Roku shares have fallen roughly 27% since the end of July to push it below both its 50-day and 200-day moving averages. The chart at the top shows the wild up and down ride Roku has been on in 2021 and its near-term downturn could certainly continue. But Roku has gone on similar stretches before and the nearby three-year chart shows the stock is up 490%.

The recent downturn has Roku sitting close to oversold RSI levels (30) at 37. The pullback also cooled off its valuation, with it trading 45% below its year-long highs at 13.3X forward 12-month sales. Roku’s current levels are rather enticing, especially as the Nasdaq and the S&P 500 hit records.

Wall Street remains extremely bullish on Roku, with 16 of the 18 brokerage recommendations Zacks has resting at “Strong Buys.” The company operates in a space poised to dominate entrainment for the coming years, if not decades.

Roku doesn’t care if Netflix has the most users or Disney has the most-watched show because it benefits from the industry as a whole. And digital could account for 65% of the roughly $240 billion-a-year advertising industry in the U.S. by 2023, up from just one-third of ad spending only a few years ago.