Wall Street dumped Target (TGT - Free Report) after its first quarter FY22 financial release on fears of mounting costs and inventory issues. The retail titan lowered its guidance when it released its quarterly results on May 18.

Target stock tumbled 25% following its report, for its worst one-day showing since Black Monday in 1987. Target then on June 7 slashed its outlook again, citing inventory imbalances and more.

Target and its peers such as Walmart were huge beneficiaries of the initial covid lockdowns and the post-pandemic boom that saw Americans go on shopping sprees for items such as furniture and TVs.

TGT remains a retail powerhouse and will for years to come. The retailer’s expanded e-commerce offerings and same-day services will help it thrive in the have-it-your-way style shopping environment that’s here to stay.

Along with its new-age shopping push, the Minneapolis-based retailer has focused even more heavily on its own in-house brands for fashion, furniture, food, and more. Target’s various store brands succeed because of its ability to adapt and stay on-trend, while remaining affordable.

Target’s near-term outlook, however, has been slashed almost overnight on the back of rising costs and a mismatch between its current inventory and what shoppers want, having returned to their normal lives. 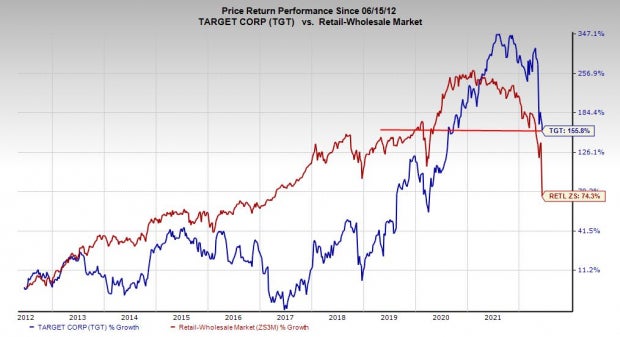 Investors initially hammered Target after its first quarter release for its executive team’s inability to navigate rising freight costs and more. Alongside its bottom-line miss, Wall Street didn’t appreciate Target’s decision to absorb higher costs instead of passing them on to consumers. Walmart (WMT - Free Report) got hit hard for a similar report.

Along with the hit to margins, Target is dealing with inventory issues and is currently stuck holding onto too much furniture, appliances, and more. Target on June 7 announced that it would take “actions to right-size its inventory for the balance of the year and create additional flexibility to focus on serving guests in a rapidly changing environment.”

The Minneapolis retailer is set to make additional markdowns, as well as remove excess inventory, and cancel orders. In addition, TGT will add “incremental holding capacity near U.S. ports to add flexibility and speed in the portions of the supply chain most affected by external volatility.”

Target is also experiencing other near-term setbacks that it plans to address, including “working with suppliers to shorten distances and lead times in the supply chain.”

The nearby chart shows how far Target’s adjusted earnings outlook has fallen since its Q1 release and since the company provided its updated guidance last week. Overall, its FY22 Zacks consensus estimate has dropped 37% and 20% for 2023.

Target’s downward earnings revisions help it land a Zacks Rank #5 (Strong Sell) right now. The stock has tumbled around 45% from its November records and 35% in 2022, with it now trading around where it was in August 2020.

TGT is Monday’s Bear of the Day given its near-term outlook and the continued unknowns ahead on the consumer spending and inflation fronts. But Target remains a strong company and the retailer flexed its financial strength on June 9 when it raised its dividend by 20% even as it undergoes its campaign to recalibrate its inventory.