Biohaven Pharmaceutical (BHVN - Free Report) announced that the FDA has accepted its supplemental new drug application (sNDA) for its migraine drug Nurtec ODT (rimegepant). The sNDA is seeking a label expansion of the drug to include preventive treatment of migraine. A decision on the sNDA from the FDA is expected in the second quarter of 2021.

Notably, Nurtec ODT was approved as an acute treatment of migraine in February. It will be the first and the only drug indicated for treating acute episodes of migraine attacks as well as prevention of future occurrences of migraine, if the sNDA is approved.

Shares of Biohaven have gained 41.2% so far this year compared with the industry’s increase of 3.1%. 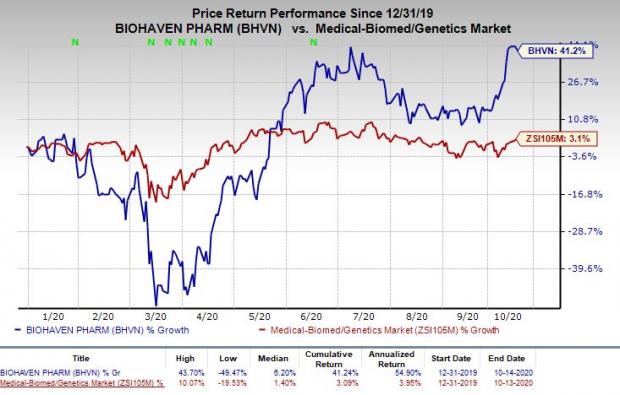 The drug was launched as an acute treatment of migraine in March. It recorded $10.9 million worth of sales in the first half of 2020. A potential label expansion as a preventive migraine treatment next year will further boost the drug’s sales.

It is important to note that Nurtec competes with other CGRP-targeted drugs including Teva’s (TEVA - Free Report) Ajovy, Lilly’s (LLY - Free Report) Emaglity, AbbVie’s (ABBV - Free Report) Ubrelvy and Amgen’s Aimovig. While Ajovy, Emaglity and Aimovig are injected, Ubrelvy and Nurtec are available for oral administration.

Apart from migraine, Biohaven is evaluating Nurtec as a potential treatment of trigeminal neuralgia in a phase II study. Meanwhile, the company is developing another CGRP antagonist zavegepant for the acute treatment of migraine as well as for non-migraine indications. The company’s other key candidates include troriluzole, which is being developed for treating ataxias, Alzheimer’s disease and obsessive compulsive disorder, and verdiperstat, which is being evaluated in patients with multiple system atrophy or amyotrophic lateral sclerosis.

Moderna Gets Consent to File MAA for Coronavirus Vaccine in EU