Data showed that LN-145 monotherapy achieved an objective response rate (ORR) of 21.4%, including one complete response (CR) and five partial responses. Moreover, data also showed a disease control rate of 64.3%. Meanwhile, median duration of response has not been achieved at the median follow-up of 8.2 months. The company plans to present additional data from the Cohort 3B at a medical meeting in the second half of 2021.

Please note that the Cohort 3B of the study is evaluating LN-145 in mNSCLC patients whose disease has progressed following treatment with immune checkpoint inhibitor (ICI) therapy, including tyrosine kinase inhibitors in patients with oncogene-driven tumors.

LN-145 achieved a better ORR as second-line treatment for NSCLC patients compared to treatment with ICI therapies of ICI-naïve patients whose disease has progressed following treatment with chemotherapy. However, the data from the IOV-COM-202 study seems to fail market expectation as shares fall after the announcement. Some analysts noted that data from a small academic study at Moffitt evaluating an investigational TIL therapy demonstrated an ORR of 25% with two CRs, which was higher than the improvement achieved by LN-145.

Shares of Iovance were down 2.2% on Jun 29, following the study data readout. However, the company’s shares have declined 43.2% so far this year against the industry’s increase of 1%. 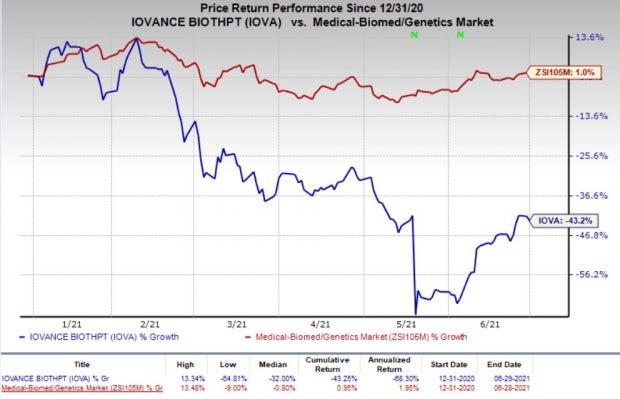 We note that the IOV-COM-202 is also evaluating LN-145 and other TIL therapy candidates across several oncology indications. The study is evaluating a combination of LN-145 and Bristol-Myers’ (BMY - Free Report) Opdivo (nivolumab) and Yervoy (ipilimumab) in patients with recurrent or metastatic NSCLC in patients who have previously been treated with a checkpoint inhibitor monotherapy. Another combination of LN-145 with Merck’s (MRK - Free Report) Keytruda (pembrolizumab) is being evaluated in patients with unresectable or metastatic NSCLC or patients with head and neck squamous cell carcinoma who have not received prior immunotherapy. The study is also evaluating other TIL therapies namely lifileucel in combination with Keytruda, LN-144 monotherapy and LN-145-S1 monotherapy in melanoma patients.

Iovance also announced that it has dosed the first patient in its registration-enabling phase II study — IOV-LUN-202 — that will evaluate LN-145 in second-line mNSCLC where patients have progressed after one prior ICI and chemotherapy. The study will evaluate LN-145 in NSCLC patients with tumors that do not express PD-L1 as well as patients whose tumors express PD-L1 in separate cohorts.

Meanwhile, we note that the company is also focused on developing potency assays for lifileucel to support its approval for melanoma indication. Last month, Iovance announced that the company needs to continue its ongoing work developing and validating its potency assays for lifileucel, following feedback from the FDA on its previously submitted assay data. The company plans to submit an additional assay data to the FDA in the second half of 2021, thus delaying its potential BLA submission for lifileucel for melanoma from 2021 to the first half of 2022.