ChemoCentryx (CCXI - Free Report) announced that it has filed an amendment to its new drug application (“NDA”) with the FDA for its novel oral drug avacopan for the treatment of anti-neutrophil Cytoplasmic Autoantibody (ANCA)-associated vasculitis.

Per FDA, the amended NDA constitutes a major amendment to the earlier NDA, thereby extending the PDUFA goal date to Oct 7, 2021.

The NDA is primarily based on data from phase III ADVOCATE study. The participants (n=331) were randomized to receive avacopan plus either Rituxan or cyclophosphamide (followed by azathioprine/mycophenolate) or study-supplied oral prednisone plus either rituximab or cyclophosphamide (followed by azathioprine/mycophenolate). If needed, the participants in both treatment groups can also receive non-protocol glucocorticoids.

In the year so far, ChemoCentryx has plunged 77.3% compared with the industry’s decline of 8.5%. 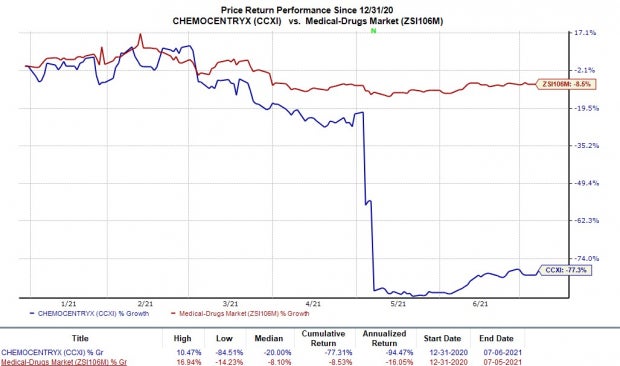 ANCA-associated vasculitis is a systemic disease in which over-activation of the complement pathway further activates neutrophils, causing inflammation and destruction of small blood vessels, and thereby organ damage and failure, with the kidney as the major target. This may be fatal if not treated.

Current therapies for ANCA-associated vasculitis consist of immuno-suppressants (cyclophosphamide or rituximab) combined with daily-administered glucocorticoids (steroids) for prolonged periods of time, which can cause significant illness including death. The successful development and commercialization of the drug will boost the company’s prospects.

Avacopan is also being developed to treat patients with C3 glomerulopathy (C3G) and hidradenitis suppurativa (HS). Moreover, the drug has been granted orphan drug designation by the FDA for ANCA-associated vasculitis and C3G.

While ChemoCentryx owns and retains the commercial rights to the drug in the United States, Switzerland-based Vifor Pharma holds exclusive rights to commercialize avacopan outside the country.