The Mosaic Company (MOS - Free Report) logged profits of $437.2 million or $1.14 per share in second-quarter 2021, up from $47.4 million or 12 cents in the year-ago quarter. The fertilizer maker gained from higher prices and its transformation efforts in the quarter.

Barring one-time items, adjusted earnings per share were $1.17 that beat the Zacks Consensus Estimate of $1.01.

Net sales rose roughly 37% year over year to $2,800.7 million in the quarter. The figure missed the Zacks Consensus Estimate of $2,927.8 million. Sales were driven by higher prices that more than offset reduced volumes.

Net sales in the Phosphates segment rose roughly 54% year over year to $1.2 billion in the quarter, driven by increased prices. Sales volumes in the segment slipped around 11% year over year to 2 million tons. The segment’s gross margin per ton improved to $309 from $18 in the year-ago quarter as better pricing and transformation benefits more than offset reduced volumes and higher raw material costs.

Moving ahead, the company noted that it expects strong agricultural trends to continue through the second half of 2021, driving demand for fertilizers. Grower economics remain attractive in most global growing regions on strong crop demand, affordable inputs and favorable weather, the company noted.

Shares of Mosaic have rallied 118.7% in the past year compared with 66.1% rise of the industry. 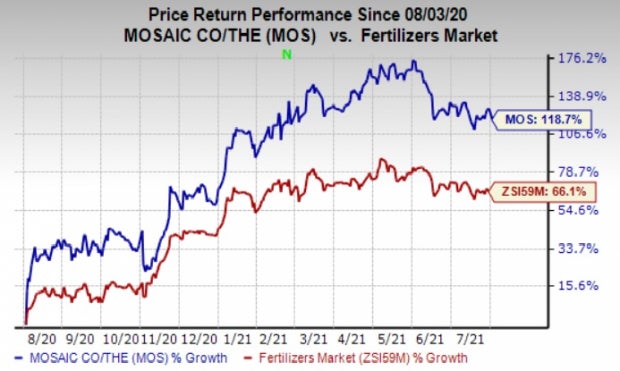 Nucor has a projected earnings growth rate of 444.9% for the current year. The company’s shares have surged around 138% in a year.

ArcelorMittal has an expected earnings growth rate of 1,484.4% for the current year. The company’s shares have shot up around 202% in the past year.

Chemours has an expected earnings growth rate of around 66.8% for the current fiscal. The company’s shares have rallied roughly 74% in the past year.