General Dynamics Corporation (GD - Free Report) recently clinched a modification contract to support research and development and formulation of new concepts for current and future submarine platforms. The contract has been awarded by the Naval Sea Systems Command, Washington, DC.

Valued at $12.8 million, the contract is expected to conclude in Sep 2022. Majority of the work related to the contract will be executed in Groton, CT.

Rising geo-political tensions globally have persuaded  countries to strengthen their defense system. Additionally, tensions have intensified at the water borders of several countries, resulting in maritime conflicts. Consequently, this has resulted in huge investments in submarines by countries globally over the past few years to improve their underwater capabilities.

The huge defense spending on submarines has also been driving the demand for submarines and the need to modify them with enhanced features. This, in turn, has resulted in huge contract inflows for submarines for companies like General Dynamic. The latest contract win is a testament to that.

In this context the Virginia-class submarine, co-designed by General Dynamics and Huntington Ingalls (HII - Free Report) ,is worth mentioning here. This stealth submarine is equipped with features that make it suitable for any marine warfare. The submarine excels in littoral and open-ocean environments, and collects intelligence critical to the full spectrum of warfare. They also excel in extended submerged operations on account of superior stealth, endurance, mobility and firepower features.

In fact, in order to meet the increased demand for the submarines and improve the production rate, General Dynamic has been making huge investments with an aim to modernize and expand its facility at Electric Boat for submarine construction. Interestingly, the company will be investing $1.8 billion to expand and modernize facilities at Electric Boat.

As nations across the globe increase their spending on defense arsenals, the demand for submarines is likely to grow. Per a report from Research and Markets firm, the global submarine market is projected to witness a CAGR of 4.36% through 2031. Such strong growth trends indicate ample growth opportunities for General Dynamic. Other aerospace majors who are likely to benefit from this growth trend are BAE Systems (BAESY - Free Report) , Huntington Ingallsand Northrop Grumman (NOC - Free Report) .

For instance, BAE Systems’ Astute class submarines are the U.K.’s largest and most powerful attack submarines and can strike at targets up to 621 Miles from the coast with pin-point accuracy.

The long-term earnings growth rate estimate for BAE Systemsis pegged at 4.8%. Shares of BAESY have appreciated 4.2% in the last one year.

Huntington Ingalls is into designing and building nuclear-powered submarines for the U.S. Navy. The company holds a dominant position in the submarine industry, with the United States being a stalwart in the global defense space.

The Zacks Consensus Estimate for Huntington’s 2021 earnings has been revised upward by1.6% in the last 60 days. The shares of HII have lost 7.8% in the last one year.

The Zacks Consensus Estimate for Northrop Grumman 2021 earnings has been revised upward by2.6% to $25.57 in the last 60 days. Shares of Northrop Grumman have gained 14% in the past one year.

In the past one year, shares of General Dynamics have gained 23.1% against the industry’s decline of 36.7%. 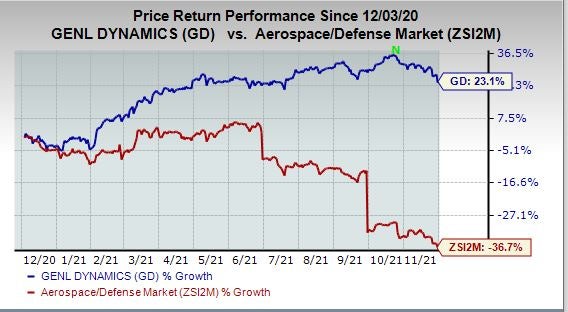