Eni SPA (E - Free Report) has attracted Sixth Street Partners as the leading bidder for its power generation unit, Enipower, per a report by Reuters.

Since September 2021, Eni has been trying to divest a stake of up to 49% in EniPower in a transaction valued at up to $1.4 billion. U.S. investment firm Sixth Street Partners is in advanced negotiations with Eni to acquire the minority stake in the business.

Enipower is one of the leading power producers in Italy. It operates five gas-fired plants and one co-generation plant in the country, with a total capacity of more than 5 gigawatts. The divestiture is part of Eni’s efforts to fund its low-carbon transition. The company is undergoing a major restructuring, which aims at separating its traditional oil and gas business from assets related to energy transition.

The imperative to reduce the consequences of climate change becomes more important with each passing day. Hence, investing in fossil fuels is considered a riskier bet than it used to be. Eni is divesting its stake to help fund its shift away from the fossil fuel economy. Notably, the latest divestment is expected to complete by the end of first-quarter 2022.

Eni aims to achieve carbon neutrality across all its businesses by 2050. In November 2021, Eni announced the divestment of a 49.9% stake in Algerian gas pipelines to Snam for $436 million. The transaction, expected to be completed by the third quarter of 2022, is likely to aid it in the energy transition path.

Shares of Eni have outperformed the industry in the past six months. The stock has gained 40.2% compared with the industry’s 36.1% growth. 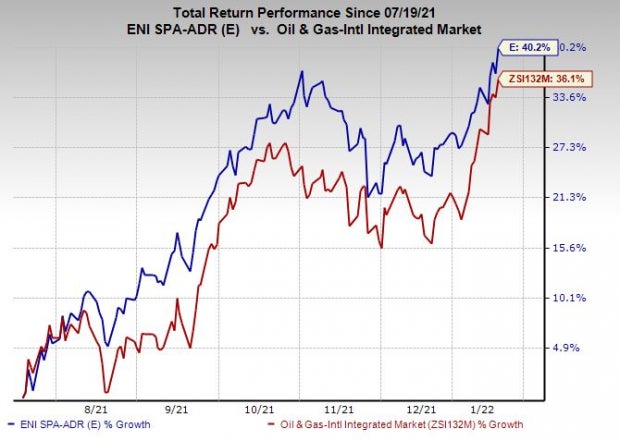 Williams Companies' debt maturity profile is in good shape, with its $4.5-billion revolver maturing in 2023. WMB is also paying its shareholders an attractive dividend, yielding nearly 6%. Beside these, the company's board recently approved a share repurchase program worth $1.5 billion, highlighting its commitment to shareholders.

Exxon Mobil Corporation (XOM - Free Report) is one of the leading integrated energy companies in the world. XOM's bellwether status in the energy space, an optimal integrated capital structure and management's track record of CAPEX discipline across the commodity price cycle make it a relatively lower-risk energy sector play. Overall, the company is not focusing aggressively on production to win back investors but instead is making every effort to preserve shareholders’ capital while lowering costs.

On Oct 27, ExxonMobil announced its fourth-quarter dividend at 88 cents per share, indicating an increase from 87 cents in the previous quarter. Following the increase, the integrated energy giant’s annual dividend for 2021 is $3.49 per share, higher than $3.48 in 2020. Looking at the dividend history, XOM is strongly focused on returning capital to shareholders as the energy firm has hiked its annual dividend payment for more than 39 consecutive years.

Murphy USA is committed to returning excess cash to shareholders through continued share buyback programs. As part of the initiative, the fuel retailer recently approved a repurchase authorization of up to $1 billion, which will commence once the existing $500-million authorization expires and be completed by Dec 31, 2026. The move underscores MUSA’s sound financial position and commitment to rewarding shareholders.