Net sales rose roughly 91.8% year over year to $5,373.1 million in the quarter. It missed the Zacks Consensus Estimateby 4.29%. Sales were driven by gains in all segments and higher year-over-year prices.

Net sales in the Potash segment rose to around $1.6 billion in the reported quarter, from $663 million in the prior year’s quarter. The upside was driven by higher prices. Sales volumes in the segment were flat year over year to 2.3 million tons. The segment’s gross margin per ton increased to $403 from $93 in the year-ago quarter.

The Phosphate division’s net sales climbed around 50% year over year to $1.8 billion in second-quarter 2022, driven by higher prices. Sales volumes in the segment fell 15% year over year in the quarter to 1.7 million tons. The gross margin per ton in the quarter was $383, up from $156 in the year-ago quarter.

The company noted that it expects tight grain and oilseed markets to persist through the balance of 2022 and into 2023. The war in Ukraine, high temperatures in North America and Europe, and developing drought conditions in parts of South America underscore the risk for lower yields globally, MOS stated.

The company forecasts total capital expenditures of $1.3 billion for full-year 2022. It projects selling, general and administrative expenses in the range of $420-$450 million.

Shares of Mosaic have increased 64% in the past year compared with a 53.9% rise of the industry. 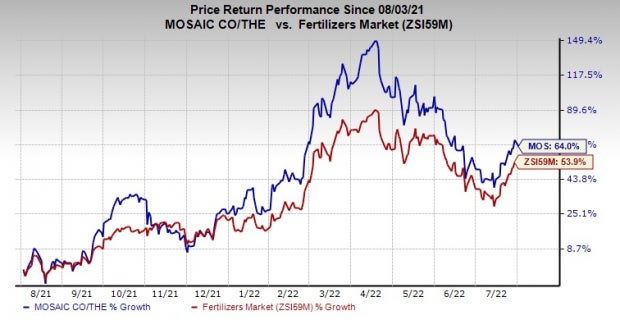 Albemarle has a projected earnings growth rate of 247% for the current year. The Zacks Consensus Estimate for ALB's current-year earnings has been revised 7.8% upward in the past 60 days.

Albemarle’s earnings beat the Zacks Consensus Estimate in each of the last four quarters. It has a trailing four-quarter earnings surprise of roughly 22.5%, on average. ALB has gained around 15.9% in a year and currently carries a Zacks Rank #2 (Buy). You can see the complete list of today’s Zacks #1 Rank (Strong Buy) stocks here.

Cabot’s earnings beat the Zacks Consensus Estimate in each of the trailing four quarters, the average being 16.2%. CBT has gained around 34.7% over a year.

Sociedad’s earnings beat the Zacks Consensus Estimate in two of the trailing four quarters, the average being 28.2%. SQM has gained 102.9% in a year. The company sports a Zacks Rank #1.

What's in Store for Western Digital (WDC) Ahead of Q4 Earnings