China Association of Automobile Manufacturers (CAAM) released vehicle sales data for July. Vehicle sales in China rose 29.7% year over year to 2.42 million units, extending June’s recovery on the back of relaxation of COVID-induced curbs as well as stimulus packages offered by the government in an effort to revive the market. The volumes, however, declined slightly from 2.5 million units sold in June owing to heat waves, which slowed production pace and hampered buyers’ visits to dealerships. Per CAAM, sales in the first seven months of 2022 contracted 2% year on year to 14.47 million units. In contrast, sales of new energy vehicles (NEVs) jumped around 115% year over year to 3.194,000 units in the January-June timeframe. Sales of NEVs surged 117% to 593,000 units in July.

Meanwhile, U.S. legacy automaker Ford (F - Free Report) reopened the order book for its much-celebrated all-electric F-150 truck but consumers will have to shell out more for the possession of the same. In view of rising prices of raw materials, the company hiked the prices of the electric truck across all trim levels.

Last but not least, the merger announcement of the online used vehicle retailer Shift Technologies Inc. (SFT - Free Report) and used-vehicle consignment company CarLotz, Inc. (LOTZ - Free Report) grabbed much attention. The merger is expected to close in the fourth quarter of 2022, subject to approval by the shareholders of both companies.

Westport incurred a loss of 7 cents per share in second-quarter 2022 against a profit of 7 cents in the year-ago period. The loss was narrower than the Zacks Consensus Estimate of a loss of 8 cents. Westport registered consolidated revenues of $80 million in the quarter, beating the Zacks Consensus Estimate of $75.9 million. The top line rose 1% from the year-ago level of $79 million. Westport generated a negative adjusted EBITDA of $4.3 million in the second quarter against $6.2 million in the year-ago period. This was mainly due to pressure from supply chain & inflation on production costs.

Ford re-opened its order bank for the all-electric F-150 Lightning pickup nearly nine months after it had stopped taking reservations.While that was indeed good news for customers eager to possess the F-150 Lightning, the upgraded prices might pinch their pockets. Ford hiked the prices of the EV truck between $6,000 and $8,500 across the various trim levels due to a surge in material costs and other factors, as cited by the company.

The base model, the Lightning Pro, which was initially $39,974, has seen a price rise of $7,000 and now comes at $46,974. The prices of XLT High Extended Range and Lariat Extended Range were hiked the most by $8,500 and now cost $80,974 and $85,974, respectively. The Platinum Extended range saw the smallest price hike of $6,000, though it now retails for $96,874.The price increases will not affect customers who have already ordered a vehicle and are awaiting delivery. The sticker shock will be felt by reservation holders who have not yet ordered a truck.

CarLotz entered into a definitive agreement with Shift Technologies for a stock-for-stock merger. The combined company will continue to trade on Nasdaq under the ticker SFT. Per the terms of the agreement, CarLotz shareholders are expected to receive nearly 0.692158 shares of Shift common stock for each share of CarLotz common stock. On the basis of the expected exchange ratio, upon the closing of the merger, Shift’s then-current equity holders will own nearly 52.9% of the combined company, and CarLotz’s then-current equity holders will own around 47.1% of the combined company, calculated on a fully diluted basis. Upon closing, the merged company is anticipated to have a cash position of nearly $125 million.

The merged company has the potential to be a leading omni-channel used vehicle auto retailer. The two businesses have compatible geographies, wherein Shift’s focus is on the West Coast, while CarLotz enjoys a strong presence in the mid-Atlantic region. The deal will thus amalgamate the most profitable assets of both companies and lead them to mutually reap the benefits. It aims to be the best online and in-person used car purchasing platform by offering the broadest assortment of used vehicle inventory to customers and allowing the flexible transaction. 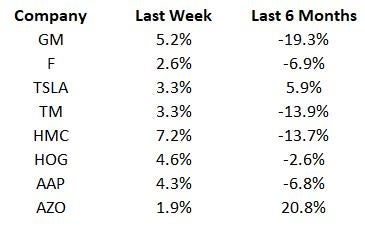 Industry watchers will keep a tab on July 2022 passenger vehicle registrations to be released by the European Automobile Manufacturers Association soon.  Also, stay tuned for any updates on how automakers will tackle the semiconductor shortage and make changes in their business operations.