Bed Bath & Beyond Inc. (BBBY - Free Report) has continued its dry spell with the drab second-quarter fiscal 2022 results. Both top and bottom lines not only missed the Zacks Consensus Estimate but also declined year over year.

The home goods retailer has failed to bring in-demand styles on its shelves. Earlier, its efforts to launch more store-branded products went for a toss. The ongoing inflation has led to consumers cutting down on discretionary spending. However, the company is on track to attract customers with more national brands and discount coupons.

Shares of BBBY moved up nearly 2% before the trading session on Sep 29. This might be due to a sequential improvement in certain areas. The company’s aggressive inventory-optimization actions, including accelerated markdowns and strategic promotions, aided its quarterly performance to some extent.

The company has been witnessing strength in its Welcome Rewards loyalty program, with 1.3 million members by the end of this August. New members also account for higher transaction values and frequent purchases across all three banners. Also, its buybuy BABY business continues to gain a strong market share.

Encouraged by such upsides, BBBY revealed plans to relaunch the Baby registry business by fiscal 2022, increase marketing investments and realize the strategic shift of its merchandise assortment to boost top-line growth.

Consequently, this Zacks Rank #3 (Hold) stock has gained 24.3% in the past three months compared with the industry’s growth of 10.7%. 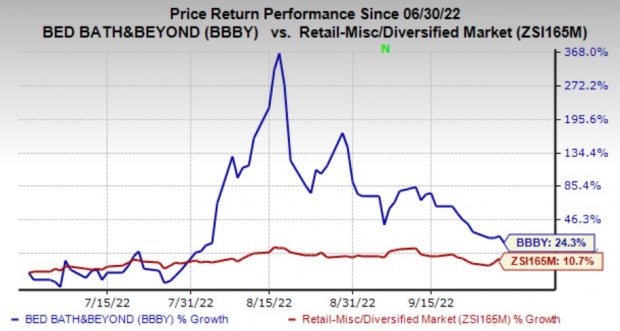 Bed Bath & Beyond has reported an adjusted loss of $3.22 per share in the fiscal second quarter against earnings of 4 cents in the year-ago quarter. The figure was also wider than the Zacks Consensus Estimate of a loss of $1.59.

The adjusted gross profit slumped 41% to $398.3 million in the fiscal second quarter. Also, the adjusted gross margin contracted 630 basis points (bps) to 27.7%, including the unfavorable impacts of 260 bps related to aggressive clearance activity in order to right-size its inventory and 100 bps negative impact of supply-chain costs. Excluding transient costs, the metric was 31.3%.

SG&A expenses slumped 2.8% to $634.9 million in the reported quarter, driven by reduced costs stemming from lower rent and occupancy expenses. Adjusted SG&A expenses, as a percentage of sales, expanded 1120 bps year over year to 44.2% due to lower sales.

In a recent development, the company announced an update, wherein it will undertake significant SG&A reductions, including a 20% dip in corporate and supply chain, as well as lowering indirect spending.

Adjusted EBITDA was negative $168 million against $85 million reported in the year-ago period. The decline was mainly due to sluggish sales and dismal margins. The adjusted EBITDA margin contracted 1600 bps year over year to 11.7%.

On Aug 31, 2022, the company secured more than $500 million of new financing, including a newly expanded $1.130-billion asset-backed revolving credit facility and a $375.0-million FILO facility. Also, it has launched its 12 million share ATM program. As part of this, BBBY sold nearly three million shares for $30 million, which is likely to be utilized for strategic financial objectives.

In the fiscal second quarter, it closed two stores, including one namesake store and one Harmon store. The company noted that it paused its new store and remodel programs for the rest of fiscal 2022 in a bid to reduce its planned capital expenditure by $150 million.

As of Aug 27, 2022, the company had 955 stores in operation, comprising 768 namesake stores across 50 states, the District of Columbia, Puerto Rico and Canada; 137 buybuy BABY stores; and 50 stores under Harmon, Harmon Face Values or Face Values names. Additionally, the company’s joint venture operates 12 flagship stores in Mexico.

Management issued a fiscal 2022 view. The company expects comparable sales to decline 20% with improvement in the second half of fiscal 2022. Adjusted SG&A expenses are predicted to be $250 million for the year on aggressive cost-cutting actions. Also, it anticipates break-even operating cash flow by the end of fiscal 2022.

The Zacks Consensus Estimate for Dillard's current financial-year sales suggests growth of 6% from the year-ago period. DDS has an expected EPS growth rate of 14.6% for three to five years.

Ulta Beauty, which operates as a retailer of beauty products, currently sports a Zacks Rank #1. ULTA has a trailing four-quarter earnings surprise of 32.8%, on average. ULTA has an expected EPS growth rate of 11.9% for three to five years.

The Zacks Consensus Estimate for Boot Barn’s current financial-year revenues suggests growth of 13.1% while EPS fell 1.5%, from the year-ago reported figure. Boot Barn has a trailing four-quarter earnings surprise of 16.1%, on average.

KemPharm (KMPH) Up On Positive Data From Sleep Disorder Study