This has been a banner year for the broad U.S. stock market, with the major benchmarks scaling multiple highs in the final weeks. In particular, the Dow Jones Industrial Average has moved up 5,000 points this year — the biggest annual gain in its history — and is moving closer to another major milestone of 25,000.

Optimism over tax reform and higher chances of the plan being signed into law this Christmas has acted as the latest catalyst to the second-largest bull market. This is especially true, as a massive $1.4-trillion tax cut will lead to an economic surge, boosting job growth and reflation trade. It will further accelerate earnings, leading to increased dividend and buyback activities. Additionally, the tax repatriation will allow companies to bring the offshore cash back home, paving the way for increased mergers and acquisitions.

Further, the dual tailwinds of strong corporate earnings and solid global economic growth, with most major countries growing simultaneously for the first time in years, are driving the rally throughout the year. The combination of other factors like a rise in oil price and higher interest rates are also fueling growth in the market.

Given this, most of the stocks on the blue-chip index have delivered astounding returns. Below, we have highlighted five players that are leading the index this year and are likely to continue doing so heading into the New Year.

Based in Chicago, IL, The Boeing Company is the world's largest aerospace company and leading manufacturer of commercial jetliners and defense, space and security systems. The company has seen positive earnings estimate revision of 12 cents for this year over the past three months, with an expected earnings growth rate of 30.89% compared with the industry average of 16.38%. While the stock carries a Zacks Rank #3 (Hold) and a VGM Score of B, it has a dismal Zacks Industry Rank in the bottom 31%. It has surged nearly 90% this year. (Looking for the Best Stocks for 2018? Be among the first to see our Top Ten Stocks for 2018 portfolio here.)

Based in Peoria, IL, Caterpillar manufactures and sells construction and mining equipment, diesel and natural gas engines, industrial gas turbines, and diesel-electric locomotives for heavy and general construction, rental, quarry, aggregate, mining, waste, material handling, oil and gas, power generation, marine, rail, and industrial markets. The stock has seen solid earnings estimate revision of $1.22 per share over the past three months for this year, reflecting year-over-year earnings growth of 88.22%, much higher than the industry’s average growth of 70.46%. Further, Caterpillar has a Zacks Rank #1 (Strong Buy) and a VGM Score of C. It boasts a robust Zacks Industry Rank in the top 1% and has delivered solid returns of 61.5% this year. You can see the complete list of today’s Zacks #1 Rank stocks here.

Based in Cupertino, CA, Apple is engaged in designing, manufacturing and marketing mobile communication and media devices, personal computers, and portable digital music players. It has seen positive earnings estimate revision of 26 cents over the past three months for this fiscal year with an expected growth rate of 21.43% compared with the industry’s average decline of 12.16%. Apple currently has a Zacks Rank #3 and a VGM Score of C. The stock has an ugly Zacks Industry Rank in the bottom 7% and has gained about 52.3% in the year-to-date time frame.

Based in San Francisco, CA, Visa operates the world's largest retail electronic payments network and is one of the most recognized global financial services brands. The stock has seen positive earnings estimate revision of six cents over the past three months for this fiscal year. Its earnings are expected to grow 16.45%, well above the industry’s average growth of 6.75%. Visa has a Zacks Rank #2 (Buy) and a VGM Score of D. However, it belongs to a dismal Zacks Industry Rank in the bottom 31%. The shares of Visa are up 45.5% this year.

Based in Oak Brook, IL, McDonald’ operates and franchises restaurants in the United States, Europe, the Asia/Pacific, the Middle East, Africa, Canada, Latin America, and internationally. It has seen positive earnings estimate revision of couple of cents over the past three months for this year with an expected growth of 14.47% compared with the industry’s average growth of 6.70%. McDonald’s has a Zacks Rank #3 and a VGM Score of C. It belongs to a dismal Zacks Industry Rank in the bottom 13%. Shares of MCD have climbed 43.2% so far this year. 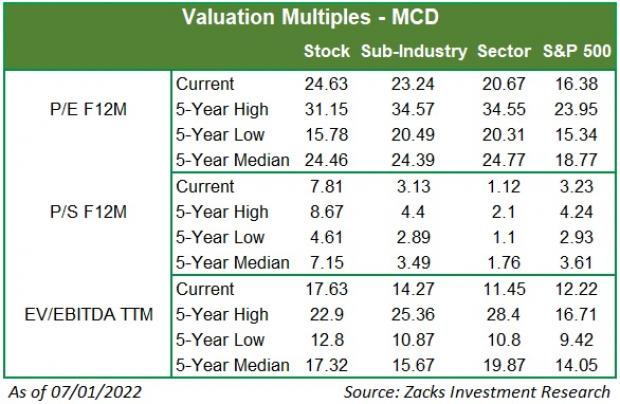 Full disclosure, Kevin Matras now has more of his own money in one particular stock than in any other. He believes in its short-term profit potential and also in its prospects to more than double by 2019. Today he reveals and explains his surprising move in a new Special Report. Download it free >>