Following the release, shares of the Zacks Rank #3 (Hold) company inched up 0.9% to $138.10 at close, on Jun 9. The day before, the company announced a partnership with the International Atomic Energy Agency in a bid to enhance cancer treatment. (Read More: Varian to Boost Cancer Treatment With New Partnership)

Varian's ProBeam is the world's first commercially available pencil beam scanning system, which is the most precise form of proton therapy available. Notably, the ProBeam Compact system is a single-room system equipped with a 360-degree gantry for intensity modulated proton therapy.

Additionally, in May, Varian announced the completion of the cyclotron installation for the Varian ProBeam Compact single-room proton therapy system at Biopolis, an international biomedical research hub in Singapore. (Read More: Varian Medical Installs ProBeam at Research Hub in Singapore)

How Does Varian Stand to Gain?

Per WHO, the total number of people undergoing cancer diagnosis worldwide is estimated to be 43.8 million. Asia accounts for nearly half the cases, being home to almost 60% of the global population.

MarketWatch opines that the global proton therapy market is poised for rapid growth, seeing a CAGR of more than 9% by 2022.

Hence, the latest developments have been well-timed ones for Varian. 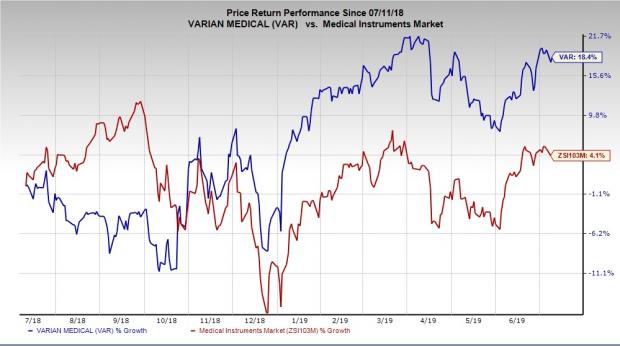 Penumbra has a long-term earnings growth rate of 21.5%.

Oxford Immunotec has a long-term earnings growth rate of 25%.