This hasn’t been an easy year for small-cap stocks by any stretch of imagination. For most of July now, major benchmarks have created new milestones, led mostly by heavyweight components. In contrast, similar success has eluded their small-cap counterparts. In fact, the struggles of smaller and mid-sized companies have been hidden by the successes of their larger counterparts.

A similar story plays out when it comes to earnings numbers, with the small-cap group set to suffer its second successive quarterly decline. A more pessimistic section of analyst believes that there is no end this earnings slump.

But our estimates project a revival during the fourth quarter, with the earnings decline decelerating in the next reporting period. Also, attractive valuations, expectations of a softer dollar and falling yield spreads are likely to boost small-caps in the months ahead. This is why you should add them to your portfolio.

The small-cap laden Russell 2000 Index hit a record high last in August 2018. The index comprises around 2000 U.S. firms whose market capitalizations are less than $10.1 billion, with a median market value of $791 million. Subsequently, the Russell 2000 entered a bear market, which sent it plunging 27.2% lower by last December.

Looking at the quarter as a whole for the small-cap index, total Q2 earnings are expected to be 9.4% below the year-earlier level on 3.2% higher revenues. This compares to an 18.2% decline in Q1 earnings on 4.3% higher revenues.

In comparison, total earnings for the 44 S&P 500 members that have reported Q2 results already are up 1.1% on 2.6% higher revenues, with 81.8% beating EPS estimates and 61.4% beating revenue estimates.

Meanwhile, total S&P 500 earnings are expected to be down 2.3% from the year-earlier period on 4.0% higher revenues. (Read: Mixed Start to Q2 Earnings Season) 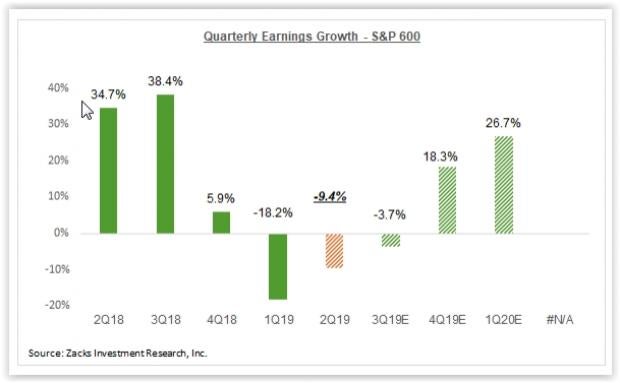 However, a deceleration in earnings decline is likely from the third quarter and a substantial revival has been projected for the last quarter of 2019. The logic behind this is quite coherent. Small-cap underperformance this year will likely lead to relatively better earnings growth in 2020.

According to Steven DeSanctis of the Jeffries Group, the Russell 2000 is unlikely to set any new records this year. However, DeSanctis has increased his year-end target for the index to 1,665. This represents a 6.4% increase in 2H19, compared to flat growth likely to be experienced by the S&P 500.

According to DeSanctis, the last time small-cap valuations were so low were in the middle of 2003. When small caps exhibit attractive valuations compared to their larger counterparts, they are likely to outperform large caps by 6.4% over the next year, “and have done so 78% of the time.”

Another factor likely to boost small caps going forward is a change in the Federal Reserve’s monetary stance. The central bank is widely expected to reduce the federal funds target rate later this month and further cuts are likely before the end of the year. DeSanctis points out that since 1945, small caps have outperformed larger stocks 75% of the time that the Fed has cut rates.

The primary reason for this outperformance, according to him, is that rate cuts weaken the dollar. This aids smaller, domestically focused companies more than their established, often multinational counterparts. A reduction in rates leads to a comparatively higher reduction in borrowing costs for smaller companies.

Despite their underperformance in the first half of the year, small-cap stocks are set for a revival in the rest of 2019. Their attractive valuations are likely to help them outperform their larger counterparts in 2H19.

Resurgence in earnings growth is also projected. Meanwhile, rate cuts will aid small companies more than their larger counterparts by reducing borrowing costs. This is why it makes sense to add small-caps to your portfolio. However, picking winning stocks may be difficult.

We have narrowed down our search to the following stocks, each of which has a Zacks Rank #1 (Strong Buy) and VGM Score of A. You can see the complete list of today’s Zacks #1 Rank stocks here.

Fly Leasing Limited FLY is engaged in acquiring and leasing commercial jet aircraft under long-term contracts to a diverse group of airlines throughout the world.

Fly Leasing’s projected growth rate for the current year is 36.3%. The stock has gained 62.6% year to date.

Oasis Midstream’s projected growth rate for the current year is 79.1%.  The stock has gained 37.3% year to date.

Quanex Building Products’ projected growth rate for the current year is 30.8%. The stock has gained 33.1% year to date.

Transcat’s projected growth rate for the current year is 9.5%. The stock has gained 31.4% year to date.

UnitedHealth (UNH) Beats on Q2 Earnings, Guides Up for 2019