TELUS to Launch Wireless Services in Ahousaht This December

TELUS Corporation (TU - Free Report) communicated that it has invested more than $500,000 to build a new cell site in Ahousaht, a remote community off the west coast of Tofino on Vancouver Island. This planned investment is part of the company’s commitment to invest $4.7 billion throughout British Columbia between 2017 and 2020.

The investment is in addition to the billions of dollars TELUS spends to purchase spectrum from the federal government and the significant amount it pays on annual maintenance. Notably, TELUS is the first provider to bring high-speed wireless voice, text and Internet service to the community. While construction on the cell tower is near completion, the site is likely to be operational this December with 4G LTE network.

TELUS has invested more than $47 billion in technology and operations in British Columbia since 2000 through 2018. Moreover, the company serves 178 of British Columbia’s First Nations with wireless and broadband wireline technologies. It has collaborated with 46 Indigenous Governments to bring PureFibre to their communities. It is likely to benefit from the increasing penetration of smart devices, wireless data services and wireline fiber optic networks.

The company expects balanced growth in wireless and wireline businesses on the back of investments in high-speed broadband technology. It remains focused on executing its strategies along with amplifying efforts on cost efficiency for margin-accretive customer growth and investments to support its expansion strategy.

TELUS has invested more than $175 billion in its network and operations since 2000 and plans to add about $40 billion in the next three years across the country. It aims for greater subscriber base in its key growth segments, including wireless, high-speed Internet and TELUS TV. Greater demand for reliable access and fast-data services is expected to support customer additions.

TELUS has long-term earnings growth expectation of 6.3%. The stock has added 6% compared with the industry’s growth of 3.9% in the past three months. 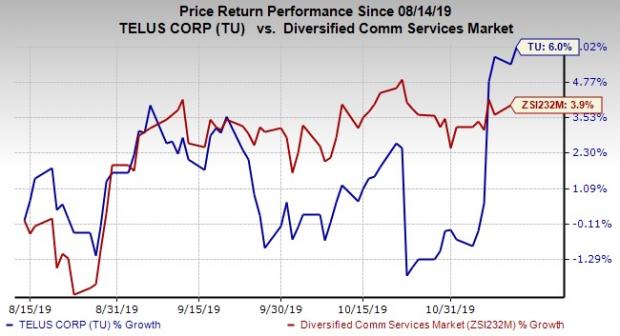