Pfizer Inc. (PFE - Free Report) announced that the FDA has approved a supplemental new drug application (sNDA) for its eczema drug, Eucrisa (crisaborole) ointment, 2%. The sNDA sought label expansion of Eucrisa for the treatment of mild-to-moderate atopic dermatitis (“AD”) or eczema in children aged three months to two years. With this approval, Eucrisa becomes the first and only steroid-free, topical prescription medication for use in infants and toddlers up to age of 24 months.

The approval is based on data from a phase IV study, CrisADe CARE 1, which evaluated Eucrisa in infants aged 3 months to less than 24 months with mild-to-moderate AD. Data from the study showed that the drug was well-tolerated over a four-week regimen and its safety profile was consistent with the previous clinical studies.

Please note that the drug is already approved for eczema in patients aged two years and older in the United States and Canada. The drug is also marketed in Israel and Australia under the brand name Staquis for the given patient population.

We would like to remind investors that Pfizer added Eucrisa to its portfolio with the acquisition of Anacor Pharmaceuticals in June 2016. The company estimates Eucrisa’s peak sales potential to be at least $2 billion.

Per the press release, among all AD cases, a total of 45% begin within the first six months of life and 60% start during the first year. The label expansion of Eucrisa in children aged three months to two years is likely to boost its prospects further.

Shares of Pfizer have declined 24.2% so far this year compared with the industry’s decrease of 23.9%. 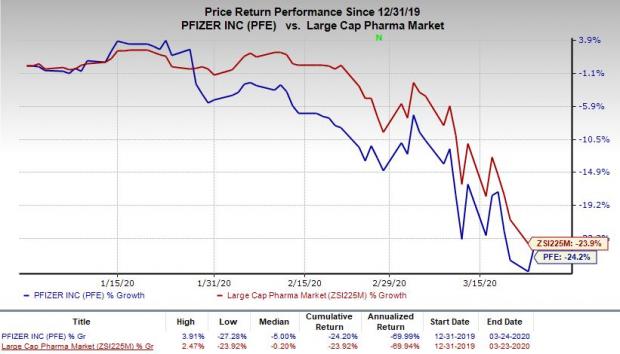 Another interesting eczema candidate in Pfizer’s portfolio is its investigational JAK1 inhibitor, abrocitinib. Earlier this month, the company had announced top-line data from a phase III study, which showed that a statistically higher percentage of patients receiving abrocitinib witnessed improvement in clear skin from baseline compared to placebo. An NDA is expected to be filed seeking approval for the candidate in AD patients in the third quarter of 2020.