Axsome Therapeutics, Inc. (AXSM - Free Report) announced that the FDA has granted a Breakthrough Therapy designation to AXS-05 for the treatment of agitation associated with Alzheimer's disease (AD). The status was granted based on the recent positive results from the pivotal phase II/III ADVANCE-1 study, which evaluated AXS-05 for the given indication.

The FDA’s Breakthrough Therapy tag is granted to expedite development and review of drugs that target serious or life-threatening conditions. The new medicine needs to have shown encouraging early clinical results that demonstrate a substantial improvement of a clinically significant endpoint over other approved medicines.

In March 2020, Axsome accelerated the completion time of the phase II/III ADVANCE-1 study, which currently evaluates AXS-05 for the treatment of agitation associated with AD. As a result, top-line data from the study is now expected in early second-quarter 2020, which was previously expected in the third.

In April, the company announced positive top-line data from the phase II/III ADVANCE-1 study on AXS-05 for treating agitation associated with AD. The candidate met the primary endpoint and rapidly, substantially and significantly improved agitation in patients with Alzheimer’s disease compared to placebo.

Shares of Axsome were up 11.9% following the above announcement on Friday. However, the stock has declined 17% so far this year against the industry’s increase of 10.5%. 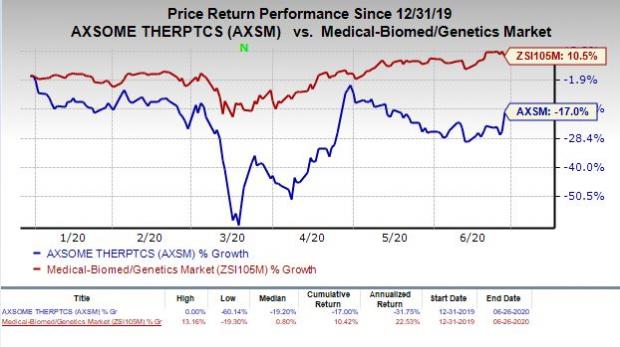 Per the company, positive results from its GEMINI study on MDD along with the previously-completed ASCEND study will be sufficient to support the filing of a new drug application (NDA) for AXS-05 to treat MDD. The NDA is expected to be filed in the fourth quarter of 2020.