Note: The following is an excerpt from this week’sEarnings Trends report. You can access the full report that contains detailed historical actual and estimates for the current and following periods, please click here>>>

•    The big banks will kick-start the Q4 reporting cycle for the Finance sector, with a host of big one-time charges related to the tax law change likely making headlines in the mainstream media. We will be seeing plenty of such tax related one-time charges and gains in other sectors as well.

•    We will be excluding these one-time charges and gains from our earnings data. But the widespread use of these (accounting) charges will reduce the ‘quality’ of Q4 earnings even as the underlying growth trend is expected to pick up.

•    Total Q4 earnings for the S&P 500 index are expected to be up +8.8% from the same period last year on +7% higher revenues. The revisions trend for Q4 estimates has been very favorable, with earnings estimates holding up better than has been the case in any other recent period.

•    Earnings growth is expected to be positive for 13 of the 16 Zacks sectors, with double-digit growth for the Energy, Technology, Construction, Industrial Products, Basic Materials and Autos sectors.

•    Earnings growth is expected to be negative for three sectors in Q4 – Consumer Discretionary, Conglomerates and Transportation.

•    Estimates for 2018 and 2019 have started going up as a result of the tax law changes, with the expected 2018 earnings growth going up by two percentage points since the law’s enactment. The trend will likely continue in the coming days as well.

The revisions trend for the Q4 earnings season has been unusually favorable since the quarter got underway, as the chart below of evolution of Q4 earnings growth expectations shows 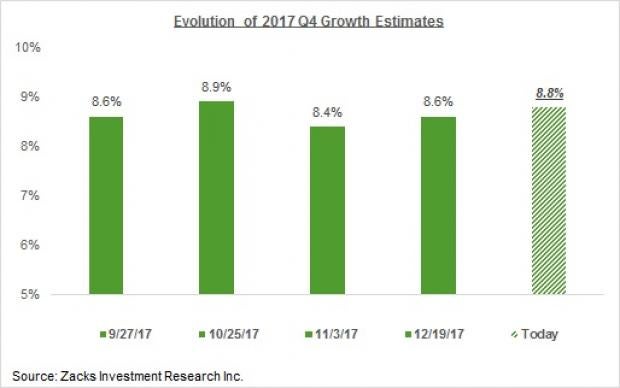 This revisions trend is the most notable positive development on the estimate revisions front in recent years. Q4 estimates for 10 of the 16 Zacks sectors have come down since the start of the quarter, with estimates for the remaining 6 sectors going up. The strongest gains have been in the Energy, Industrial Products, Basic Materials and Technology sectors.

Q4 estimates for the Finance sector have come down since the quarter got underway, with the current +2.8% earnings growth expectation for the quarter down from +5% at the start of the period. The Zacks Major Banks industry, of which JPMorgan (JPM) and Citigroup (C) reporting this week are a part, failed to impress on the earnings front in Q3 and all the factors that weighed on Q3 results remained in place in Q4 as well. These factors include at best flat net interest margins, persistent deceleration in loan growth and soft trading revenues. On top of all of this are the aforementioned charges that will likely muddy the waters.

A brief comment about these one-time charges is in order there. The charges will pertain to two areas in particularly – the value of deferred tax assets (DTA) and lowered tax on the ‘deemed’ repatriation of foreign earnings. The deferred tax asset issue, which primarily pertains to prior losses that these companies can use to defray future tax liabilities, will be notable for the major banks.

Most of the major banks incurred big losses during the financial crisis and those losses found a place on the banks’ balance sheets as deferred tax assets. But the value of these DTAs need now to be lowered given the new 21% corporate tax rate. These DTA adjustments will likely eat up the banks’ entire officially reported accounting earnings, with the issue particularly notable at Citigroup (C), which is expected to take a $20 billion one-time charge. All of the other major banks and investment banks are expected to take big charges as well, though none of them are in the Citigroup league. JPMorgan (JPM) is expected to take a $2 billion charge, while Bank of America (BAC) is on track to take a $3 billion charge. Goldman Sachs (GS - Free Report) and Morgan Stanley (MS) are expected to take $5 billion and $4 billion charges, respectively.

Market participants aren’t losing any sleep over these coming charges as can be seen in the recent stock market performance of bank stocks. Stocks in the Major Banks industry have lagged the broader market over the past year, with the major bank stocks up +20.4% vs. +21.7% gain for the S&P 500 index. The industry has actually outperformed the S&P 500 index since early September 2017, with bank stocks up roughly double the index’s +11.7% gain since September 7th. Driving this recent outperformance is developments on the interest rates front, with benchmark treasury yields up significantly in that time period.

In other words, while bank stocks will respond to unusually good or bad underlying results, the overall performance trend will remain tied to developments on the interest front.