The early part of the year generally holds promise for restaurant stocks, mainly because of the holiday season. People tend to dine out more, which translates into strong gains for restaurants and thereby, the industry. What makes it better is the overall favorable macro backdrop for the industry — gradually declining energy costs, which means more spending power with people.

Yet, variations may be noticed at the regional level due to local business conditions. Also competition has really been heating up in the industry on the price side and companies are looking to introduce more value meals to boost traffic.

Bellwethers like McDonald’s Corporation (MCD - Free Report) posted better-than-expected results for the first quarter for 2016. The company also recorded positive comps growth on the back of solid comps across all its segments. The upside can be attributed to the turnaround plan announced by CEO Steve Easterbrook in May 2015.

On the other hand, Yum! Brands Inc.’s (YUM - Free Report) all - important China division showed signs of a turnaround in the first quarter of 2016, with the third consecutive quarter of comps growth. It reported mixed first-quarter 2016 results, with earnings surpassing the Zacks Consensus Estimate but revenues missing the same.

Despite the positives, during the first quarter, consumer spending, which constitutes more than two-thirds of the U.S. economic activity, increased at a meager 1.9%. This indicated its lowest rate in a year and a decline from the fourth-quarter level of 2.4%.

Consumers are increasing their spending only modestly, as an increase in jobs this year is yet to translate into significantly higher wages. Higher health care costs and still tightened credit availability also lowered consumer discretionary spending in the U.S., thus hurting the revenues of the restaurant industry.

Further, challenges posed by detrimental international markets have been dragging down the top line of most restaurant companies.

This week, we expect earnings releases from major restaurant operators like Jack in the Box Inc. (JACK - Free Report) , Shake Shack Inc. (SHAK - Free Report) and The Wendy's Company (WEN - Free Report) . Let’s take a look at how these companies are placed ahead of their scheduled announcements.

Jack in the Box is set to report second-quarter fiscal 2016 results on May 11, after the market closes.

Last quarter, the company posted a negative earnings surprise. In fact, the company has missed earnings estimates in two out of the trailing four quarters, with an average negative earnings surprise of 1.76%. Jack in the Box currently has Zacks Rank #3 (Hold) and an Earnings ESP of 0.00%. (Read: Jack in the Box Q2 Earnings: What's in the Cards?) Our previous article showed a negative ESP for this quarter. However, estimates changed thereafter.

Shake Shack is set to report first-quarter results on May 12, after the market closes. Last quarter, the company posted a positive earnings surprise of 14.29%. In fact, the company has beaten earnings estimates in the four trailing quarters with an average beat of 121.43%.Shake Shack currently has Zacks Rank #3 and an Earnings ESP of 0.00%. (Read: Shake Shack Q1 Earnings: Can the Stock Surprise?) 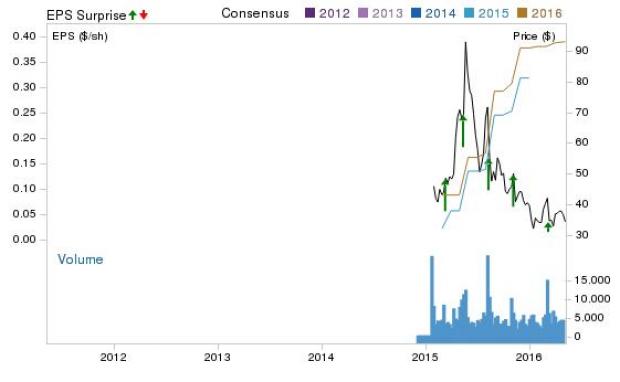 The Wendy's Company is set to report first-quarter 2016 results on May 11, before the opening bell.

Despite the bleak outlook surrounding the restaurant industry, not all hope is lost, as investors have already adjusted prices (and their expectations) for the uncertain environment. This leaves ample scope for an earnings beat.