PDL BioPharma, Inc. (PDLI - Free Report) reported earnings of 2 cents per share (including the impact of stock-based compensation expense) in the fourth quarter of 2019, missing the Zacks Consensus Estimate of 5 cents. The bottom line was also lower than the year-ago earnings of 10 cents.

The company reported total revenues of a negative $5.8 million in the quarter against the positive $46 million generated in the prior year. The negative revenues were due to a change in the fair value of royalty rights for the type II diabetes products acquired from Assertio Therapeutics .

Notably, along with the earnings release, PDL announced a plan to dissolve the company by the end of the ongoing year. The monetization of the assets is currently underway and the company targets to file a certificate of dissolution under the Delaware Law by 2020 end.

Shares of PDL were down 2.3% in after-hours trading on Wednesday following the above news. In fact, the stock has lost 12.6% in the past year compared with the industry’s decrease of 12.1%. 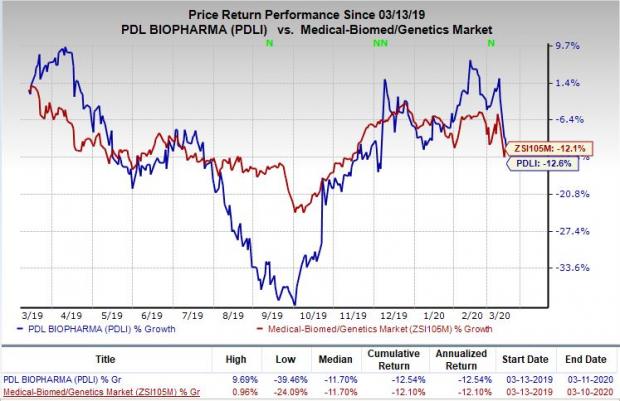 Notably, revenues from LENSAR laser system increased 19% year over year and also 4.9% sequentially. Per the company, the majority of its top-line growth was owing to revenues recognized from the ex-U.S. markets. Additionally, in the fourth quarter, LENSAR procedure volume surged 41% year over year.

During the fourth quarter, PDL recognized negative revenues of $26.8 million from royalty rights against the positive $19.1 million revenues reported in the prior-year period.

We remind investors that in December 2019, PDL completed the strategic review process, which was initiated in September. The company decided to halt the execution of its growth strategy, cease additional investments and seek value by monetizing the assets as well as returning net proceeds to its shareholders.

Per the company, last month, PDL’s board of directors approved a formal plan of complete liquidation and passed a resolution to seek stockholder approval at its next annual stockholders' meeting to dissolve the company under the Delaware state law.

Moreover, PDL engaged financial advisors to evaluate the sale of its holdings in Evofem Biosciences, Inc. (EVFM - Free Report) common stock, its portfolio of royalty assets plus its Noden and LENSAR subsidiaries.